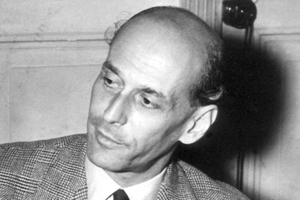 Austrian Opera Impresario, General Manager of the Metropolitan Opera House from 1950-1972. He was formerly an opera and concert manager in Germany, England and Scotland. In 1947, he helped to form the Edinburgh Festival.

Bing was born in Vienna into a solid middle-class business family with his dad head of the Austrian iron cartel, one of four kids. As a kid, he was expelled from several schools for failing to pass the examinations for university admission. He took work at a string of theaters and operas in Germany, Austria and Czechoslovakia.

By 1935, Bing received an invitation to stage Mozart performances on the estate in England. He described his time in Glyndebourne as "one of the happiest times of my life," 1935-49. He became a citizen of the UK and adopted the look and mode of his adopted homeland. In 1956, he was knighted by Queen Elizabeth II.

When WW II forced a hiatus to his work, Bing worked as a department store assistant manager in London. In 1949, Met General Manager Edward Johnson inquired if Bing was interested in becoming his successor. His appointment, three weeks later, took the Opera world by surprise.

His beginning at the Met in the early 1950s was, nonetheless, rocky, especially when he fired several dozen artists in disputes over their age, salary and other differences. Ascetic and acerbic, he was known for his sharp, no-nonsense verbal playing of superstars. He was remembered as well for his kindness that included the establishment of a pension plan for poorly paid members of the Met orchestra, chorus and ballet corps. Perhaps one of his greatest achievements was the removal of the color barrier, beginning his hiring policy of black artists in his second season.

"With Bing, you always know where you stand," one performer said. He was notorious for getting what he wanted from singers - or telling them to leave. When one world-known diva suddenly declared that she would not continue until she was granted a solo curtain call, Bing looked at his watch. He said, "I shall give you exactly three minutes to go back to work. Otherwise, I'll have you thrown out of the Met and sue you for tonight's entire house receipts. You now have 2 1/2 minutes left." The diva sang - without the bow.

Acknowledging that he ran the Met as a dictatorship, Bing thrived on his 14-hour-a-day job, one of the most responsible, hazardous, complicated and controversial posts in the operatic world. He combined business and artistic expertise with luck to pull a performance together, regarding each performance as a miracle.

Exceptionally slender, he was described by the New Yorker magazine as "an elegant iceberg of a man who obviously conceals at least seven-eighths of his feelings."

Bing wrote in his second autobiography of his sadness and loneliness after his wife of 54 years, Russian ballerina Nina Schelemskaya-Schelesnaya, suffered a stroke. His mental deterioration began after her death in 1983.

He married 47-year-old Carroll Douglass, a former mental patient and twice-divorced Washingtonian four decades his junior on 1/09/1987. The wedding took place in Alexandria, VA, two days after the mentally declining Bing had been placed under the court conservatorship of attorney Paul Guth, who had handled his financial affairs for 30 years. A news report on 9/17/1987 said that Sir Bing and his wife had been missing for the past three weeks. Suffering from Alzheimer's, he disappeared several times after his move to Britain in early 1987. A New York judge ruled him incompetent to manage his estate and appointed a conservator. Proceedings were begun to annul his nine-month marriage to Carrol, and the annulment went through 9/06/1989. During this "romantic interlude," Bing's estate dwindled from $900,000 to less than $30,000 and two valuable paintings.