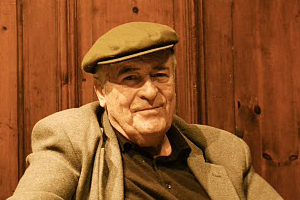 Bertolucci was the first of two sons born to Attilio, a poet, anthologist, film critic and art history teacher. His mom, a teacher, Italian-Irish, had come from Australia. His brother Giuseppe later followed in Bernardo's footsteps as a film maker. The family lived in the rural outskirts of Parma until the early '50s, when his dad's work took him to Rome. He speaks of a "golden childhood with a big, comfortable house, servants, understanding parents, and a pursuit of intellectualism." By the time he was 12 he had several poems published, at 15, he made two short films about children in the country. A collection of his poems was published in 1962, winning the Premio Viareggio, one of Italy's top literary awards.

Bertolucci studied at the University of Rome where he met the film maker Pier Paolo Pasolini and joined him in the film business. His first works were decidedly left-wing cinema.

He underwent psychoanalysis at the age of 28, emerging more meditative and insightful, a romantic among directors. Handsome in a rugged way, he is 6' 1" with an engaging grin and a nice sense of humor. Camera-shy, he has refused to enter the career of acting himself, preferring the business end of the camera. Baptized Roman Catholic, he left the church while still in his teens. "Like most Communist intellectuals in Europe, I am condemned to be divided," he said, "I have a split personality, not quite in sync with my heart and my brain."

At the age of 37, he was still a bachelor, though romantically involved with several women. He concluded a five-year conjugal relationship with Maria Paola Maino in 1972. In 1973 he met cool, elegant actress Clare Peploe, 33 in Rome at a screening. She became her collaborator on the scripts for "1900" and "Luna." Both were box office flops for him in the U.S. but he and Peploe married in 1978, the first marriage for both of them. They commute between her apartment in London and his in Rome.