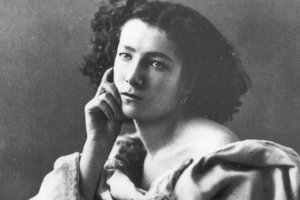 French stage actress who was world famous and a legend in her own time, known as "The Divine Sarah." She was the illegitimate daughter of a prostitute, the mistress of a prince and an actress from 1862. As a child, father unknown, her mama sent her to convent school where she was to acquire the refinements that would aid her skills in attracting a rich lover. Indifferent to academics, she entered the Conservatory of Music and Drama, determined to be an actress.

She took no prisoners in her climb to fame, scrambling, clawing and biting her way, so to speak, to the center spotlight. All she had going for her was an indomitable will and unstoppable ambition. She was small, too thin, none too attractive and her voice did not carry. She developed skills along with experience, both with lovers and in the theater, and her reputation began to grow among production companies and with the public. In 1867 she gained her first notable theatrical success. The War of 1870-71 interrupted her career and for a time she served as a nurse during the conflict. When peace was restored, she returned to the stage, achieving one artistic triumph after another. Her grand passion and excessive gestures were ideal for the 19th century stage, though she would be hooted off the boards in a modern production. At the time, she mirrored appropriately the style of humors, sentiments, anxieties, gestures and social inflections of her day.

Her lovers included Victor Hugo, the younger Dumas, the artist Gustave Dore, Edmond Rostand, the French writer Victorian Sardou and of course many incidental suitors. At the age of 20 she had a bastard son, Maurice, by the Prince de Ligne. She managed to spoil the boy, paying his debts when he became a wastrel and a gambler. Fidelity was inconceivable and she liked to play one suitor off against another. Her affairs were conducted with the maximum of high drama, frenzy and tragedy worthy of a theatrical life.

By the late 1870s, her art and her affairs had become components of Parisian atmosphere. She was called by some the greatest figure of her day. Madame Sarah journeyed from country to country, a triumph everywhere. She was the benchmark against whom every actress measured herself. Her flamboyance escalated every year. She kept odd beasts as pets. She was probably the first woman to ascend in a balloon and surely the only star to play both Ophelia and Hamlet, in separate productions.

In 1882, she was married for the only time for one year, to a nondescript individual, Jacques Damala; he died a decade later.

After a leg injury in 1905, she suffered for nine years before having the leg amputated in 1914. She continued to perform, write, sculpt and manage her own theater.

Bernhardt died of uremic poisoning and a weak heart on 3/26/1923, 8:05 PM, Paris. At her funeral, the streets of Paris were lined ten deep as the coffin made its journey to Pere-Lachaise cemetery.