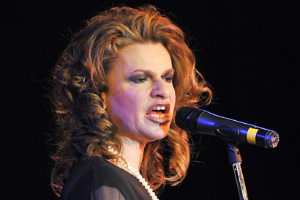 Sandra Bernhard (born June 6, 1955) is an American comedienne, singer, actress and author. She first gained attention in the late 1970s with her stand-up comedy in which she often bitterly critiques celebrity culture and political figures. Bernhard is number 97 on Comedy Central's list of the 100 greatest standups of all time.

Bernhard has often addressed her childhood in interviews and within the context of her stand-up comedy. She was born in Flint, Michigan, the daughter of Jeanette and Jerome Bernhard. She has three older brothers. Her family moved to Scottsdale, Arizona, when she was 10.

Of her Jewish family, Bernhard stated in her show Without You I'm Nothing: "My father was a proctologist and my mother was an abstract artist, so that's how I view the world." In the documentary program Girls Who Do: Comedy, she discusses being a funny teenager. After graduating from Saguaro High School in Scottsdale, Arizona, she went to live and volunteer on a kibbutz in Israel. She moved to Los Angeles at the age of 19. During that time she made ends meet working as a manicurist in a high-end salon.

Bernhard became a popular staple at the Comedy Store. As her popularity as a comedienne grew she was cast as a supporting player on The Richard Pryor Show in 1977. Guest appearances on evening talk shows followed. Her big break came in 1983 when she was cast by Martin Scorsese to star as stalker and kidnapper Masha in the film The King of Comedy for which she won the National Society of Film Critics Award for Best Supporting Actress.

She began performing her first one-woman show called I'm Your Woman in 1985, and an album version was released. Bernhard appeared in a variety of tiny film and television roles throughout the 1980s while crafting her stand-up routine into a more performance art oriented show. She launched an Off Broadway one woman show called Without You I'm Nothing, With You I'm Not Much Better in 1988 which played at the Orpheum Theatre. In 1990 it was turned into a film and a double album of the same name. The film was mostly shot on location in 1989 in the Cocoanut Grove located in the Ambassador Hotel. A frequent guest on David Letterman's NBC program, it was during the run of 'Without You I'm Nothing, With You I'm Not Much Better' that she appeared with her then good friend (and rumored lover) Madonna on the show. The two alluded to their romantic relationship and staged a sexy confrontation. They would continue to be friends for several years, with Bernhard even making an appearance in Madonna's movie Truth or Dare.

In 1991 Bernhard began playing the role of Nancy Bartlett on the hit sitcom Roseanne. She appeared in 33 episodes between 1991 and 1997, and was one of the first actresses to portray an openly lesbian recurring character on American television. The role is one of her best known, something she has lamented in her stand-up as being both a blessing and a curse.

In September 1992, Bernhard did a nude pictorial for Playboy. She hosted the USA Network's Reel Wild Cinema for two seasons beginning in 1995. Bernhard continued acting in mostly independent films and TV guest roles and forays into mainstream films such as Hudson Hawk and Dallas Doll. In 1991 she released her first studio album, entitled Excuses For Bad Behavior (Part One).

In 1995, she briefly appeared as a guest in the animated talk show Space Ghost Coast to Coast, in an episode titled "Jerk". In 1996, she guest-starred on an episode of Highlander: The Series called "Dramatic License" in which she played a romance novelist writing about the life of the main character. She also appeared (as herself) on Will and Grace in an episode dealing with Will and Grace's spuriously bidding on Sandra's Manhattan apartment in order to become friendly with her and culminates in a diatribe from Bernhard when their ruse is exposed, with obfuscating sounds of a blender (she was having a smoothie made) blotting out supposed obscenities. She returned as herself briefly, two years later.

Bernhard returned to Broadway in 1998 with the show I'm Still Here... Damn It!, recorded for a live comedy album. At that time of the show Bernhard was pregnant. She gave birth to daughter Cicely Yasin Bernhard on July 4, 1998. For the next several years she would self-record all of her live shows and release cheaply made CD-R versions which were sold in the lobby of her shows. She continued touring and making smaller films and TV guest appearances.

She returned to New York in 2006 with the Off-Broadway show Everything Bad & Beautiful. The CD Everything Bad & Beautiful was critically lauded as one of her best, released by indie label Breaking Records. The year 2007 saw the creation of Bernhard's show Plan B from Outer Space as well as Indie label upstart Breaking Records release of the compilation "Breaking For the Holidays" where Bernhard co-penned Miracle of Lights with Mitchell Kaplan. She toured "Plan B" through 2008, and performed Miracle of Lights on some morning shows in New York.

In an interview with Howard Stern, the comedienne revealed that she was originally offered the role of Miranda Hobbes of TV show Sex and the City, but opted out due to the "terrible" original script and low paycheck.

In 2013, it was announced that Sandra Bernhard would be joining the cast of ABC Family's "Switched at Birth" along with "Glee's" Max Adler. Sandra would assume the role of an art professor on the Season 3 Opener in January 2014.

On July 4, 1998, Bernhard gave birth to her daughter Cicely Yasin Bernhard. She is openly bisexual. She is a strong supporter of gay rights.

In August 2006, Sandra Bernhard served as the spokeswoman in a commercial for Make-up Art Cosmetics (MAC). In the commercial, promoting PlushGlass lipgloss, Bernhard referred to someone who might not approve of her outspokenness as a "...little freaked out, intimidated, frightened, right-wing Republican thin-lipped bitch". MAC edited the line from the commercial to avoid offending some of its customer base.

In September 2008, Bernhard created controversy during one of her one-woman shows by saying that Republican Vice Presidential candidate Sarah Palin would be "gang-raped by my big black brothers" if she entered Manhattan. Bernhard later said that the remark was "part of a much larger, nuanced and yes, provocative (that's what I do) piece from my show about racism, freedom, women's rights and the extreme views of Governor Sarah Palin..."