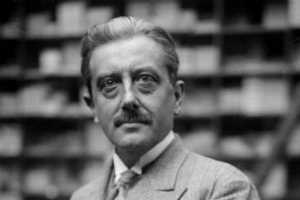 Georges Bernanos (20 February 1888 – 5 July 1948) was a French author, and a soldier in World War I. Of Roman Catholic and monarchist leanings, he was critical of bourgeois thought and was opposed to what he identified as defeatism leading to France's defeat in 1940.

Bernanos was born in Paris, into a family of craftsmen, and spent much of his childhood in the Pas de Calais region, which became a frequent setting for his novels. He served in the First World War as a soldier, where he witnessed the battles of the Somme and Verdun. He was wounded several times. After the war, he worked in insurance before writing Sous le soleil de Satan. He won the Grand Prix du roman de l'Académie française for Journal d'un curé de campagne (Diary of a Country Priest).

Despite his anti-democratic leanings and his allegiance to the Action Française (he was a member of their youth organization, the Camelots du Roi), from which he finally departed in 1932, he was able to see the danger in Fascism and Nazism (which he described as "disgusting monstrousness") before World War II broke out in Europe. He initially supported Francisco Franco and the Fascist Falange at the outset of the Spanish Civil War. But Bernanos spent part of the conflict in Majorca, observed 'a terrorized population' and became disillusioned with the Francoist cause, which he criticized in the book Diary of My Times; "My illusions on the enterprise of General Franco did not last long - two or three weeks - but while they lasted I conscientiously endeavoured to get over the disgust which some of the men and means inspired in me." Most of his important fictional works were written between 1926 and 1937.

He emigrated to South America in 1938, and stayed there until 1945, for most of the time in Barbacena, Brazil, where he tried his hand at managing a farm. His three sons returned to France to fight when World War II broke out, while he fulminated at his country's 'spiritual exhaustion' which he saw as the root of its collapse in 1940. From exile he mocked the 'ridiculous' Vichy regime and became a strong supporter of the nationalist Free French Forces led by the conservative Charles de Gaulle.

After the liberation, de Gaulle invited him to return to France, offering him a post in the government. Bernanos did return, but did not participate actively in French political life.

His writings are sharply critical of modern society and its inroads into personal liberty, both through government and through technical development. He was an isolated figure, but maintained a very high reputation among his fellow writers in France.

Bernanos died in 1948 at Neuilly-sur-Seine.