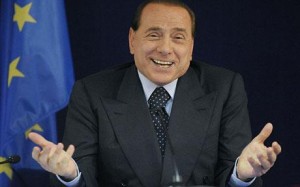 Italian politician and media magnate. He was sworn in as Italy's 54th Prime Minister in 49 years in mid-May 1994. Within seven months in office, he resigned in December 1994.

He was indicted on charges of corruption and bribery in May 1995 and lost his comeback bid in 1996. However, his House of Freedoms coalition won a comfortable majority for the elections on 14 May 2001, making him once more P.M.

Compared to America's Ross Perot, he is an entrepreneurial doer, amassing a $7 billion fortune. He has three national TV channels which draw half the viewing public and owns the country's largest publishing house and biggest media-buying agency.

During the elections, he weathered a barrage of critical scrutiny in the foreign media over allegations of corruption and potential conflict of interest because of his media interests.

Berlusconi is one of three kids of a banker dad but worked his own way through college. Earning a law degree in 1961, he began building housing complexes. Through the '70s and '80s he devoured property, amassing an empire that included a soccer team.

Berlusconi married Carla Dall'o'Glio 6 May 1965; two kids, Marina and Piersilvio. A ladies' man who loves showy women, he maintained many lovers, all actresses and singers who worked for him in TV.

In 1980 he began an affair with topless dancer Veronica Lario. They had three kids together before he divorced Carla and married Veronica on 15 December 1990.

He first entered the arena of politics at the beginning of 1994, starting his political campaign just four months prior to election. Rife with corruption, the political system was ready for a change and Berlusconi promised to lower taxes and provide jobs.

He allied his party with a mixed bag of right-wingers including neo-fascists in his cabinet and other unsavory bedfellows. To win high office in 2001 he used a combination of salesmanship savvy, soccer-team pep-talk and right-wing partners to win parliamentary elections.

On his own channels as well as state TV, he promised the Italian people that he would create 1.5 million jobs, slash income taxes and increase pension payments. He is not regarded with indifference; Italians either love him or hate him.

On 3 August 2001, opposition MPs and magistrates claimed that the P.M. had saved himself from jail on corruption cases after the parliament – dominated by his right-wing House of Freedom coalition – passed a law to decriminalize false-accounting practices. Such practices are often used by company directors to conceal fraud.

The bill, which was passed to cries of "shame, shame" from the opposition benches, wipes out years of work by investigating magistrates on hundreds of cases of corporate financial misdoings. These will include, according to opposition politicians, three cases that involve Mr. Berlusconi.

The Italian Prime Minister co-wrote an album of love songs, released in autumn 2003. About half of the 14 songs on the CD, ballards in the romantic Neapolitan style, are his.

Berlusconi used to croon on a cruise ship long before he became head of state, but he doesn’t sing on this CD entitled "Meglio Una Canzone." The vocalist is Mariano Apicella who prior to this album, used to sing in restaurants.

After Berlusconi's party suffered heavy losses in recent elections and his coalition collapsed, Berlusconi was forced to submit his resignation on 20 April 2005 but added that his government had a mandate until May 2006.

He then quickly formed a new cabinet which received a vote of confidence from Parliament’s Lower House on 27 April 2005 and Parliament’s Upper House the following day.

After a heated election for the prime minister’s seat, the Italian Supreme Court confirmed the victory of Romano Prodi in mid-April 2006, but it wasn’t until 2 May 2006 that the ever controversial Berlusconi ceded the election to his opponent.

However, in elections that ended on 14 April 2008, Berlusconi gained back his position as Prime Minister of Italy.

On 3 May 2009 his wife publicly announced that she was seeking a divorce because she was tired of his flirtations with other women. He quickly responded in the media demanding her apology.

Later the same year, on 13 December, he was assaulted by a man at a rally in Milan. Berlusconi suffered facial injuries, including a broken nose, broken teeth, and several lacerations. His injuries landed him in the hospital for a few days where he was quoted as saying, "I am bitter about this campaign of hate against me. . . But I am still here, and they won't stop me."

Scandals and allegations dogged him. In April 2011 he was put on trial on charges that he paid an underage teenager for sex. He was further accused of using his office to cover up his activities. The trial was almost immediately adjourned until 31 May.

With sinking poll numbers, worsening economic situation in the country, and sex scandals abounding, he announced in early July 2011 that he would not seek re-election in 2013. Italy's financial problems forced his resignation. Berlusconi resigned on 12 November 2011 at 21:41 (time from to Grazia Bordoni).