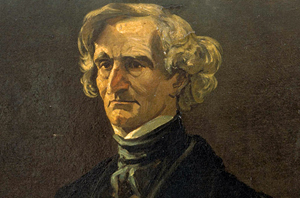 Berlioz made great contributions to the modern orchestra with his Treatise on Instrumentation and by utilizing huge orchestral forces for his works, sometimes calling for over 1000 performers. At the other extreme, he also composed about 50 songs for voice and piano.

Biography
Berlioz was born in France at La Côte-Saint-André in the département of Isère, between Lyon and Grenoble. Berlioz did not begin his study in music until the age of twelve, when he began writing small compositions and arrangements. Unlike other composers of the time, he was not a child prodigy, and never learned to play the piano, although he played the flute and guitar as a boy. His father was a physician and scholar. At the age of eighteen, Berlioz was sent to Paris to study medicine. He was uninterested in the field. Despite his father's disapproval, he abandoned his medical studies to pursue a career in music. He began attending the Paris Conservatoire in 1826 to study composition under Jean-François Lesueur. Only four years later, in 1830, Berlioz won the Prix de Rome.

Berlioz is said to have been innately romantic, experiencing emotions deeply. This characteristic manifested itself in his love affairs, and his weeping at passages by Virgil, Shakespeare, and Beethoven. His unrequited love for the Irish Shakespearean actress Harriet Constance Smithson was the inspiration for his Symphonie fantastique composed in 1830.

Smithson considered Berlioz's letters introducing himself to her so overly passionate that she initially refused his advances. The symphony which these emotions is said to have inspired was received by Parisian audiences, from the time of its 1830 premiere on, as original, startling and vivid, a mere three years after Beethoven's death.

The autobiographical nature of this piece of program music was also considered sensational at the time. After his return to Paris from his two years of study in Rome, he finally met (and eventually married) Smithson following her attendance at a performance of the Symphonie Fantastique, which she realized from the composer's program notes was his depiction of various developments in his love for her. (Kamien 242) They were married in 1833 with Franz Liszt (signing as a witness) and Heinrich Heine among the wedding guests. They had one child, Louis Berlioz, born in 1834, a source of both initial disappointment and eventual pride to his father. (Louis, captain of a merchant marine ship, died in 1867 in Havana, Cuba, of yellow fever.) Berlioz and his wife separated in 1844 although Berlioz continued to support Harriet financially and to visit her during her remaining years, which were spent in seclusion. Following her death in 1854, he married Marie Recio, a singer who had traveled and lived with him for the previous thirteen years, though, as he admitted to Louis, he married more out of duty than love.

During his lifetime, Berlioz was as famous as a conductor as he was as a composer. He travelled to Germany, England and Russia, where he conducted operas and symphonic music, both his own and others'. Virtuoso violinist and composer Niccolò Paganini commissioned Berlioz to compose a viola concerto, intending to premiere it as soloist. This became the symphony for viola and orchestra, Harold in Italy.

However, Paganini changed his mind when he saw the first sketches for the work, saying that he must be playing all the time. Although Paganini did not premiere the piece, Berlioz's memoirs recount that, once he heard it, he knelt before Berlioz in front of the orchestra and proclaimed his genius. The next day he sent him a gift of 20,000 francs.

With this money, Berlioz was able to pay off Harriet's and his own debts and suspend his work as a critic in order to focus on writing the "dramatic symphony" Roméo et Juliette for voices, chorus and orchestra. Berlioz later identified "Roméo et Juliette" as his favourite piece among his own musical compositions. (He considered his "Requiem" his best work, however.) It was a success both at home and abroad, unlike later great vocal works such as "La Damnation de Faust" and "Les Troyens," which were commercial failures.

Berlioz supported his two households by writing musical criticism for Paris publications, primarily "Le Journal des Debats," for over thirty years. He published four books during his lifetime and his "Memoirs" appeared posthumously.

Berlioz became identified with the French Romantic movement. Among his many friends were writers such as Alexandre Dumas, père, Victor Hugo, and Honoré de Balzac. Later, Théophile Gautier wrote, "Hector Berlioz seems to me to form with Hugo and Delacroix, the Trinity of Romantic Art."

Hector Berlioz is buried in the Cimetiere de Montmartre with his two wives, Harriet (died 1854) and Marie (died 1862).

Although neglected in France for much of the nineteenth century, the music of Berlioz has often been cited as extremely influential in the development of the symphonic form, instrumentation, and the depiction in music of programmatic ideas, features central to musical romanticism. He was considered extremely modern for his day, and he, Wagner, and Liszt are sometimes considered the great trinity of progressive 19th century romanticism. Richard Pohl, the German critic in Schumann's old paper, the Neue Zeitschrift für Musik called Berlioz "the true pathbreaker", Liszt was an enthusiastic performer and supporter, and Wagner himself, after first expressing great reservations about Berlioz, wrote to Liszt saying: "we, Liszt, Berlioz and Wagner, are three equals, but we must take care not to say so to him." As Wagner here implies, Berlioz himself was indifferent to the idea of what was called the "La Musique du Passé", and clearly influenced both Liszt and Wagner (and other forward looking composers) although he was never an admirer of their works. Wagner's remark also suggests the strong ethnocentrism characteristic of European composers of the time on both sides of the Rhine.

The music of Berlioz enjoyed a revival during the 1960s and 1970s, due in large part to the efforts of British conductor Sir Colin Davis, who recorded his entire oeuvre, bringing to light a number of Berlioz's lesser-known works. Davis's recording of Les Troyens was the first near-complete recording of that work. The work, which Berlioz never saw staged in its entirety during his life, is now a part of the international repertoire, if still something of a rarity. Les Troyens was the first opera performed at the newly built Opéra Bastille in Paris on March 17, 1990.

In 2003, the bicentenary of Berlioz's birth, a proposal was made to remove his remains to the Panthéon, but it was blocked by President Jacques Chirac in a political dispute over Berlioz's worthiness as a republican, since Berlioz, who regularly met kings and princes, had severely criticized the 1848 revolution, speaking of the "odious and stupid republic".

L'Éléphant, a movement of Carnival of the Animals composed in 1886 by Camille Saint-Saëns, an admirer of Berlioz, uses a theme from Berlioz's Danse des sylphes played on a double bass.

Musical influences
Berlioz had a keen affection for literature, and many of his best compositions are inspired by literary works. For Symphonie Fantastique, Berlioz was inspired in part by Thomas de Quincey's Confessions of an English Opium-Eater. For La damnation de Faust, Berlioz drew on Goethe's Faust; for Harold in Italy, he drew on Byron's Childe Harold; for Benvenuto Cellini, he drew on Cellini's own autobiography. For Roméo et Juliette, Berlioz turned, of course, to Shakespeare's Romeo and Juliet. For his magnum opus, the monumental opera Les Troyens, Berlioz turned to Virgil's epic poem The Aeneid. In his last opera, the comic opera Béatrice et Bénédict, Berlioz prepared a libretto based loosely on Shakespeare's Much Ado About Nothing. His composition " Tristia" (for Orchestra and Chorus) drew its inspiration from Shakespeare's Hamlet.

Apart from the many literary influences, Berlioz also championed Beethoven who was at the time unknown in France. The performance of the "Eroica" symphony in Paris seems to have been a turning point for Berlioz's compositions. Next to those of Beethoven, Berlioz showed deep reverence for the works of Gluck, Mozart, Étienne Méhul, Carl Maria von Weber and Gaspare Spontini, as well as respect for those of Rossini, Meyerbeer and Verdi.

Curiously perhaps, the adventures in chromaticism of his prominent contemporaries and associates Frederic Chopin and Richard Wagner seemed to have little effect on Berlioz's style.

Works of music and literature

The Symphonie Fantastique is considered his most astounding work, consisting of five movements. It is famous for the innovation of the program symphony. The story behind this work relates to Berlioz himself. "A young musician of morbid sensibility and ardent imagination, in...lovesick despair, has poisoned himself with opium. The drug, too weak to kill, plunges him into a heavy sleep accompanied by strange visions...The beloved one herself becomes for him a melody, a recurrent theme that haunts him everywhere".

In addition to the Symphonie Fantastique, some other works of Berlioz currently in the standard orchestral repertoire include his "légende dramatique" La damnation de Faust and "symphonie dramatique" Roméo et Juliette (symphony) (both large-scale works for mixed voices and orchestra), the song cycle Les nuits d'été (originally for voice and piano, later with an orchestral accompaniment), and his concertante symphony (for viola and orchestra) Harold in Italy, the quasi-liturgical Te Deum, as well as his oratorio L'Enfance du Christ.

The unconventional music of Berlioz irritated the established concert and opera scene. Berlioz had to arrange for his own performances as well as pay for them himself. This took a heavy toll on him financially and emotionally. He had a core audience of about 1,200 loyal attendees, but the nature of his large works—sometimes involving hundreds of performers—made financial success difficult. His journalistic abilities became essential for him to make a living and he survived as a witty critic emphasizing the importance of drama and expressivity in musical entertainment. (Kamien 243)

Literary works
While Berlioz is best known as a composer, he was also a prolific writer, and supported himself for many years writing musical criticism. He wrote in a bold, vigorous style, at times imperious and sarcastic. Evenings With the Orchestra (1852) is a scathing satire of provincial musical life in 19th century France. Berlioz's Memoirs (1870) paints a magisterial portrait of the Romantic era through the eyes of one of its chief protagonists.

A pedagogic work, The Treatise on Modern Instrumentation and Orchestration, established his reputation as a master of orchestration. The work was closely studied by Gustav Mahler and Richard Strauss and served as the foundation for a subsequent textbook by Nikolai Rimsky-Korsakov who as a music student attended the concerts Berlioz conducted in Moscow and St Petersburg. Berlioz was known as 'the man who wrote for 1000 musicians' so he also anticipated the development of gargantuan orchestral forces, although he never sought to use such forces merely for cheap effects or noisiness- he was the first to treat the orchestra idiomatically and systematically, although he himself was not an instrumental player. According to The Great Conductors, by Harold Schonberg, "No composer before (Berlioz), and in all likelihood none after, not even Mahler, had such a vision of pure sound and how to go about obtaining it. He reveled in new tonal combinations, in the potentiality of every instrument, in a kind of super-music played by a super orchestra," although he himself was not a skilled instrumental executant. His work as a conductor was also extremely influential, his clarity and precision evidently exercising influence over the French School of conducting right up to the present, exemplified by such figures as Pierre Monteux, Désiré-Emile Inghelbrecht, Charles Münch, André Cluytens, Pierre Boulez, Charles Dutoit, and, above all, Sir Colin Davis.