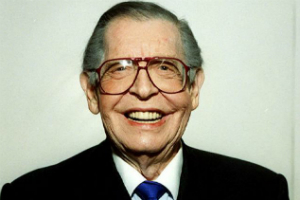 American comedian whose most successful medium was TV, which he practically dominated from 1948-1956, gaining the nicknames of "Mr. Television," (from Walter Winchell) or more commonly, "Uncle Miltie." Berle made his TV debut on 6/8/1948 on "Texaco Star Theater," the show which made network TV popular and sold more TV sets than any other ad campaign; an estimated 80 percent of all TV sets tuned into his show every Tuesday night. The brash comedian did radio for Texaco in 1947, and making the transition from radio to TV was not difficult at all: "I knew the format would work, because I had been doing it since I was 16 years old." A pioneer, Berle paved the way for other variety shows on TV, including Ed Sullivan and Arthur Godfrey's shows, which became all the rage. To reward him for such a good career, NBC signed Berle to a 30 year contract in 1951, a contract which many believed should have been for 50 years instead.

Berle was the fourth of five kids of Moses and Sarah Berlinger. His dad was in the painting and decorating business and his mom, a department store detective. They hoped that Milton would become a lawyer but at five, already a fresh kid, he achieved fame as an entertainer in the streets of his neighborhood. At six he took part in "Charlie Chaplin contests," wearing his dad's suits and shoes, usually winning prizes. His mom was always in the audience, setting the pace with her piercing laugh. Charlie Chaplin was a main part of Berle's comedic upbringing, as, in 1913, he appeared in the first full-length movie comedy, "Tillie's Punctured Romance," which starred Chaplin and Marie Dressler. "Tillie's..." was only the beginning of an illustrious 85-year career as a performer.

As a kid, Berle made his debut as a vocalist in local amateur shows, and he played in a vaudeville tour along with his youngest sister, Rosalind. His mom registered him with a theatrical agency and he was promptly given roles in silent moving pictures. He played in more than 50 pictures, many of them "hair-raisers" such as the "Perils of Pauline" series.

At the age of 11, he was entertaining WW I troops at local camps, and played a role in the classic silent film, "Humoresque." He made his stage debut in "Floradora" at the Globe Theatre in Atlantic City on 3/29/1920 and in the following months, opened on Broadway. As a team with child actress Elizabeth Kennedy, they were a vaudeville success for several years.

Going on solo as an MC, he developed a stage presence that was to be the hallmark of his career. He began to collect jokes, songs, and bits of comedy business. By 1949, he was said to have a repertoire of 50,000 jokes. As a brash young comic, he studied the styles of Eddie Cantor, Al Jolson, Ted Healy and other comedians, effectively combining a routine that was distinctively his own. At his standup opening at the Palace Theater in New York, he "took the theater by storm," and in the following two years, 1931-32, set attendance records. For the next few years he played in night clubs and theaters across the country. He had a featured role in "Earl Carroll's Vanities," and in 1936, star billing in the "Ziegfeld Follies." Other plays followed.

In 1937, he made a film debut with comic antics in a modest number of films that did not make good use of his talents. From 1939 to 1948, Berle performed in many night club engagements. In March 1947 he concluded a "record-breaking" engagement at the Carnival in New York, where he received the highest salary ever paid a night-club star.

Berle came into his own in September 1948 when he inaugurated the "Texaco Star Theater," which has been described as TV's number-one show, and was the first real smash hit in the new medium. Enormously funny, with great energy and versatility, he laid out rapid gags and broad clowning, and was named "the television star of the year." His income was over $700,000 for the year.

Berle married showgirl Joyce Matthews in 1941; they adopted a daughter and divorced, remarried, and divorced again in 1947. They parted friends. He married Ruth, a former press agent, in 1953. Their adopted son Billy became a free-lance writer.

In 1985, Berle had a by-pass operation. At 79 he showed no sign of diminished enthusiasm with a syndicated special "Milton Berle: The Second Time Around," airing on 209 channels in January-February 1986. He recently finished filming a CBS movie, "Side By Side," and his new book, a collection of gags and anecdotes, "B.S. I Love You," was selling briskly.

After 36 years of marriage, his wife Ruth died in April 1989. Soon after, he sold his house for some $3 million after living there for 19 years.