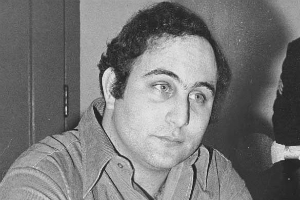 David's dad, Tony Falco, deserted the family eight years before he was born, the result of his mom's affair with a married businessman. His mom put him up for adoption and the baby was taken in by the Berkowitz family.

A sharpshooter in the U.S. Army from 1971-1974, he served in Korea, then worked in New York as a postal employee. He hated to be dirty and kept his body clean so that he "would not get sick," however his apartment was messy with left-over garbage and he went to the laundry only after he had no clean clothes left. Between 9/28/1974 and 12/23/1975, he set over 2,000 fires on city property.

On Christmas Eve, 1974, he made his first knife assault, stabbing a black woman in the Bronx, followed by five gunshot murders and six woundings of young couples. He was arrested on 8/10/1977. At his trial on 5/08/1978, he entered an insanity plea, claiming that God spoke to him through the neighbors' dog. He was given a sentence of 365 years.