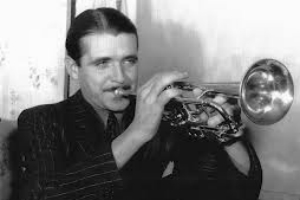 American musician, a trumpeter and bandleader of the swing of the '30s. He may have been the greatest white trumpet-player of the century along with the fabulous Louis Armstrong and Roy Eldridge. Blessed with a beautiful tone and a wide range, Bunny brought excitement to every gig where he played. His low notes were as memorable as his upper register and he was not afraid to take chances during his solos. Bunny was always memorable - until he drank it all away.

Berigan played in local bands and then college groups in the Midwest. By 1930 he was playing with the Hal Kemp's Orchestra and he soon cut his first recording. After a trip to Europe, Bunny joined Fred Rich's CBS studio band, 1931, where he remained up to 1935 outside of a few months with Paul Whiteman. With the reputation of being a hot jazz soloist, he was in demand as a studio musician, appearing on records with the Boswell Sisters and the Dorsey Brothers. In 1935 he joined Benny Goodman's Orchestra at the beginning of the swing era. Berigan had classic solos on Goodman's first two hit records, "King Porter Stomp" and "Sometimes I'm Happy" and was with Goodman on his historic tour out West, climaxing in the near-riot at the Palomar Ballroom in Los Angeles.

Berigan soon returned to the more lucrative studio scene, and made his one and only film appearance in 1936 with Fred Rich. In 1937 he joined Tommy Dorsey's band and was once again largely responsible for two hits: "Marie" and "Song of India." Bunny's solos on these tunes became so famous that in future years Dorsey had them written out and orchestrated for the full trumpet section!

After leaving Dorsey, Berigan finally put together his own orchestra. Unfortunately he was already an alcoholic and a reluctant businessman. Opportunities faded away as he fell into bankruptcy in 1939. Berigan rejoined Tommy Dorsey for a few months but never stopped drinking. When asked how he could play so well while drunk, he replied, "I practice drunk." His health began to decline and on 2 June 1942, Berigan died at age 33.