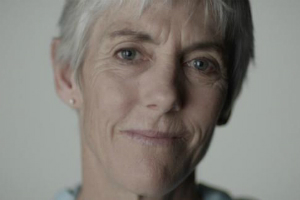 Joan Benoit Samuelson (born May 16, 1957) is an American marathon runner who won gold at the 1984 Summer Olympics in Los Angeles, the year that the women's marathon was introduced. As a result, she was the first-ever women's Olympic marathon champion. Benoit Samuelson still holds the fastest times for an American woman at the Chicago Marathon and the Olympic Marathon. Her time at the Boston Marathon was the fastest time by an American woman at that race for 28 years.

Born in Cape Elizabeth, Maine, of French and Scandinavian ancestry,[citation needed] Benoit took to long-distance running to help recover from a broken leg suffered while slaloming. At Bowdoin College she excelled in athletics. In 1977, after two years at Bowdoin, she accepted a running scholarship to North Carolina State, where she began concentrating solely on her running. She earned All-America honors at NC State in both 1977 and 1978, and in 1978 helped lead the Wolfpack to the Atlantic Coast Conference cross-country championship. After returning to Bowdoin to complete her degree, she entered the 1979 Boston Marathon as a relative unknown. She won the race, wearing a Boston Red Sox cap, in 2:35:15, knocking eight minutes off the competition record. She repeated that success with a victory again in 1983, that took more than two minutes off the world's best time, set by Grete Waitz in the London Marathon just the day before, despite having surgery on her Achilles tendons two years earlier. Her Boston course record of 2:22:43, set in 1983, was not broken for another 11 years.

In March 1984, Benoit injured her knee severely during a 20-mile training run, forcing her to undergo arthroscopic knee surgery just 17 days before the United States Olympic Women's Marathon Trials were scheduled. However, she recovered from the surgery much more quickly than expected, and showed up at the trials as the woman to beat. She beat runner-up Julie Brown by 30 seconds, winning in 2:31:04. Three months later, she competed in the 1984 Summer Olympics in Los Angeles and won the first Olympic Women's Marathon in 2:24:52, several hundred meters ahead of Grete Waitz, Rosa Mota, and Ingrid Kristiansen, all considered legends in their own rights.

Although she won the 1985 Chicago marathon, defeating Kristiansen and Mota in an American Record time of 2:21:21 (that would last as the AR for 18 years until broken by Deena Kastor in 2003 in London), Benoit was hampered in the years after her Olympic victory by injuries and struggled to compete in major races. She received the 1985 James E. Sullivan Award as the top amateur athlete in the United States.

Since her retirement from competitive running, she has written books including Running Tide and Running for Women, and has opened a running clinic. She is also a coach to women's cross-country and long-distance athletes, and is a motivational speaker and sports commentator. She founded the Beach to Beacon 10K Road Race, a 10 km (6.2 mi) race held in Cape Elizabeth, Maine, each August, going from Crescent Beach State Park to Fort Williams Park and Portland Head Light. The race attracts many of the world's top distance runners. Elite runners often run this race and then, the following weekend, run the Falmouth Road Race on Cape Cod, Massachusetts. Benoit has also won that race several times, and ran it last in 2008, finishing as 28th woman and first in her age group. In 2003, at age 46, Benoit won the Maine half marathon, defeating a field dominated by runners two decades her junior, and she was faster than all but six men overall, finishing in 1:18. In 2006 she helped pace former cycling champion Lance Armstrong as he competed in the New York City Marathon. At the 2008 US Olympic Team trials, at the age of 50, she finished in 2:49:08, setting a new US 50+ record and beating her personal goal of a mid-2:50s retirement marathon. When she ran the New York City Marathon on November 1, 2009, she broke the 50+ division record with a final time of 2:49:09. On October 10, 2010, she ran 2:47:50 for 43rd place at the Chicago Marathon—the site of her American record a quarter century earlier—missing her goal of qualifying for an eighth Olympic Marathon Team Trials race by 1:50, but recording the fastest-ever performance by a woman over 52. Later that month she ran in the Athens Classic Marathon for fun and finished in 3:02, the slowest time of her career, but she was not fully healed from her Chicago performance. In April 2011, Joan competed in the Boston Marathon, completing the course in 2:51:29 and placing 1st in her age group.

Benoit resides in Freeport, Maine. She is featured on the Nike+ iPod system as one of the congratulatory voices, along with others including Lance Armstrong. Benoit and husband Scott Samuelson have two children, daughter Abby and son Anders.

All results regarding marathon, unless stated otherwise