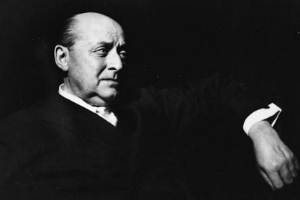 With a beat of a kettledrum, Benn started as an expressionist poet before World War I when he published a booklet of poems, titled Morgue and other Poems, 1912, dealing with physical decay of flesh, with blood, cancer, and death. Poems like this "were received by critics and public with shock, dismay, even revulsion." Benn's poetry offers an introverted nihilism: an existentialist philosophy which sees artistic expression as the only purposeful action. In his early poems Benn used his medical experience and terminology to portray a morbid conception of humanity as another species of disease-ridden animal.

He enlisted in 1914, spent a brief period on the Belgian front, and then served as a military doctor in Brussels. Benn attended the trial and execution of Nurse Edith Cavell. He worked as a physician in an army brothel. After the war, he returned to Berlin and practiced as a dermatology and venereal disease specialist.

Hostile to the Weimar Republic, and rejecting Marxism and Americanism, Benn, like many Germans, was upset with ongoing economic and political instability, and sympathized for a short period with the Nazis as a revolutionary force. He hoped that National Socialism would exalt his aesthetics, that Expressionism would become the official art of Germany, as Futurism had in Italy. Benn was elected to the poetry section of the Prussian Academy in 1932 and appointed head of that section in February 1933. In May he defended the new regime in a radio broadcast, saying "the German workers are better off than ever before," and later signed the Gelöbnis treuester Gefolgschaft, the "vow of most faithful allegiance" to Adolf Hitler.

The cultural policy of the new State didn't turn out the way he hoped, and in June 1933 he was replaced as head of the Academy's poetry section. Appalled by the Night of the Long Knives, Benn abandoned his support for the Nazi movement. He lived with perfectly together-pinched lips, internally and outwardly, and the bad conditions of the system "gave me the latter punch", as he quoted in a letter — a "dreadful tragedy!" He decided to perform "the aristocratic form of emigration" and joined the Wehrmacht in 1935, where he found many officers sympathetic to his disapproval of the régime. In May 1936 the SS magazine Das Schwarze Korps attacked his expressionist and experimental poetry as degenerate, Jewish, and homosexual. In the summer of 1937, Wolfgang Willrich, a member of the SS, lampooned Benn in his book Säuberung des Kunsttempels; Heinrich Himmler, however, stepped in to reprimand Willrich and defended Benn on the grounds of his good record since 1933 (his earlier artistic output being irrelevant). In 1938 the Reichsschrifttumskammer (the National Socialist authors' association) banned Benn from further writing.

During World War II, Benn was posted to garrisons in eastern Germany where he wrote poems and essays. After the war, his work was banned by the Allies because of his initial support for Hitler. In 1951 he won the Georg Büchner Prize. Benn had an enormous literary influence on German poetry and verse-making immediately before World War I (as an Expressionist) and even after World War II.