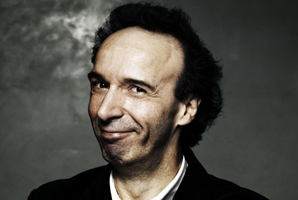 Italian actor, the star, co-author and director of "Life Is Beautiful," 1998, a film which earned seven Oscar nominations including Best Film and Best Actor and has become the top-grossing foreign-language film ever released in the U.S. On 3/21/1999, to his openly apparent joy, he won the Oscar as Best Actor. The film costars Benigni's wife, Nicoletta Braschi, 38. A superstar in Italy, the rubber-faced Benigni won the top prize at least year's Cannes Film Festival. He is effusive, enthusiastic, passionate and demonstrative.

The idea for "Life is Beautiful" came from Benigni's dad, Luigi, now 80, as he was imprisoned in Bergen-Belsen concentration camp for two years after the German-Italian alliance collapsed; he was liberated in 1945 weighing only 90 lbs. Amidst poverty and hardships, the senior Benigni taught his kids to see the bright side and the humor of situations. Luigi worked odd jobs, farmer, carpenter, bricklayer, while Roberto's mom worked at home inspecting fabric. Their home had no water or electricity and the boy shared their one bed with his parents and three older sisters.

As a kid, he loved the movies where he discovered his inspiration, Charlie Chaplin. Benigni carried an encyclopedic knowledge of cinema all his life. After high school, he considered the priesthood, attending seminary in Florence. When the school closed due to a flood, he never returned. He went instead to learn accounting in Prato, studying theater in his spare time. At 20, he went to Rome, making a name as a stand-up comic and storyteller, moving to films in 1977.

Benigni directed and starred in the comedy "Johnny Stecchino" in 1991, which became one of the highest-grossing films in Italian history. That year he married Braschi, whom he had met in the early '80s while she was studying theater in Rome. They have worked well together ever since. They hope to have kids in the future and at present, have an apartment in Rome. Knowledgeable and articulate, Benigni reads everything he gets his hands on, but never forgets his humble origins.