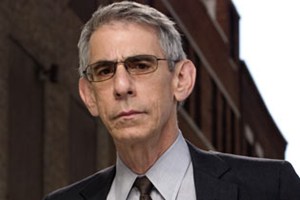 American actor who began his career as a comedian and became best known for his role as Detective John Munch on the television series "Homicide: Life on the Streets." He is a frequent guest on the Howard Stern radio show.

Richard Belzer launched his career in the 1970s as a member of an odd New York-based comedy troupe called Channel One. Some of the best sketches were assembled into an X-rated comedy feature, "The Groove Tube," in 1970 that featured Belzer, Ken Shapiro, and a brash newcomer named Chevy Chase.

For the next decade, Belzer played the comedy-club circuit, popping up as a talk show guest, and appearing in occasional films such as "Fame," in 1982. In 1983 he joined another comedy troupe that appeared nightly on the syndicated interview program, "Thicke of the Night," hosted by Allan Thicke. Though the show bombed, it enabled Belzer to secure better guest-star bookings, and ultimately a job hosting his own program in 1986 on cable. As a guest on that series, wrestler Hulk Hogan demonstrated a stranglehold on Belzer and caused the host to lose consciousness, prompting a highly publicized lawsuit by Belzer against Hogan. He sued for $5 million and settled out of court.

In the early 1990s, Richard Belzer appeared as a non-comic regular on the TV series, "Homicide: Life on the Street." His character, Detective John Munch, appeared on three other shows: "Law & Order," "The X-Files" and "Law & Order: Special Victims Unit," where he stars in 2000.

Belzer married Harlee McBride in 1982. In 1999, he authored a book about UFOs and conspiracy theories.