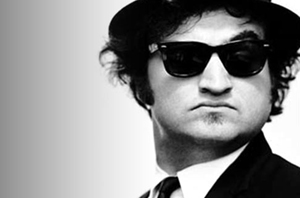 American actor and comedian who had a fast-paced, six-year career as the talented comedy star of "Saturday Night Live" and such films as "Animal House." A study in contradictions, he was a slob, an artist, comedically wild but privately sedate, a writer and actor, a man prone to swing from hostility to hospitality in a matter of seconds. In all, he was a superb entertainer whose potential was barely tapped in his too-short career, a compulsive over-achiever who lived with passionate indulgence.

The son of an Albanian born Chicago restaurateur, he majored in drama at the University of Illinois and played serious roles in stock productions. However, after discovering Second City Television, a show that let out the stops with irreverent skits, he tapped into his inner comic. He won a part in the off-Broadway "National Lampoon's Lemmings," in New York. When the long-running review closed, he went on to write and perform in "The National Lampoon Radio Hour," along with another off-Broadway production, "The National Lampoon Show."

Early in 1975, Lorne Michaels was setting up a new NBC program, "Saturday Night Live." When Belushi improvised a bit as a demented samurai warrior, he was all but hired on the spot. The show premiered in October. Belushi and his co-star, Chevy Chase, easily emerged as favorites with the viewers, and he became a star in his own right with the movie, "National Lampoon's Animal House." Thanks to Belushi's gross excesses on screen, the film connected with a segment of the American public and became one of the most popular movies of all time.

In 1979, Belushi left "SNL." His rule of thumb was that when he was no longer insecure about a performance, it was time to pack it in.

Brash in his public persona, he was a child in his personal life, inordinately concerned about his weight and desperately afraid to be alone. He took refuge in drugs, beginning a two-year period in which his life revolved around the next high, the next snort. In spite of periodic attempts to get clean, he was hooked.

He shuttled between the West Coast and his town house in New York's West Village. He made movies such as "1941," "Continental Divide," and "Neighbors," all of which flopped.

In early March 1982, Belushi and a friend went to the Rock City, a Hollywood private club. He drank heavily, leaving at 1:00 AM. When he reached his bungalow at the Chateau Marmont, he threw up. Shortly later, he was joined by a pal, singer Cathy Smith. She noted that he was pale and sweating, but he kept on drinking and snorting sizable amounts of cocaine. Another couple friends dropped by for a short while and at approximately 4:00 AM, Belushi took a shower. Somewhere between 6:30 and 8:00 AM, Smith allegedly injected Belushi with a "speedball," a mixture of coke and heroin, according to an interview which she later denied. He was sleeping peacefully when she left at 10:15 AM. Another friend came by about noon and found Belushi still and silent. A blazing star that burned out, he was dead of drug overdosed on 3/05/1982.

Though Hollywood was ready to chalk up the death as accidental, Belushi's wife Judy was not, and asked for an investigation. In June 1986, Smith pleaded guilty to involuntary manslaughter for her role in the lethal party. The story of Belushi's last days and death was written by Bob Woodward in his book, "Wired," a national bestseller.