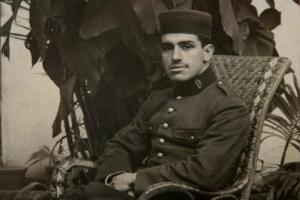 Spanish bullfighter, considered by many to have been the greatest matador of all time.

Belmonte began his bullfighting career in 1908, touring around Spain in a children's bullfighting group called Los Niños Sevillanos. He killed his firstbull on July 24, 1910. As an adult, his technique was unlike that of previous matadors; he stood erect and nearly motionless, and always stayed within inches of the bull, unlike previous matadors, who stayed far from the animal to avoid the horns. As a result of this daring technique, Belmonte was frequently gored, sustaining many serious wounds.

One such incident occurred during a November, 1927 bullfight in Barcelona, Spain. Belmonte was gored through his chest and pinned against a wall.

Belmonte's rivalry with Joselito (a.k.a. Gallito), another contender for the appellation "greatest matador of all time", from 1914 to 1920 is known as the Golden Age of Bullfighting. The era was cut short when Joselito was fatally gored on May 16, 1920, at the age of 25, at a bullfight in Talavera de la Reina, a small town not far from Madrid. Belmonte then had to carry alone the weight of the whole bullfighting establishment, which proved to be unbearable, and which in 1922 led to the first of his three temporary retirements.

His final retirement was in 1935. Belmonte was a close friend of author Ernest Hemingway, and he appears prominently in two of Hemingway's books: Death in the Afternoon and The Sun Also Rises. Like Hemingway, Belmonte committed suicide by gunshot.

Juan Belmonte was the single matador that changed the style of bullfighting.

During his bullfighting career he received 24 serious wounds and 'countless minor ones'. He later developed a grave heart condition. Shortly before his death he learned that he had lung cancer. He commited suicide on 8 April 1962, aged 69,