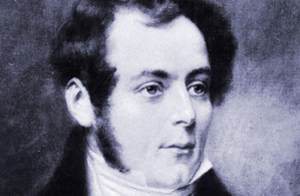 Known for his long-flowing melodic lines, for which he was named "the Swan of Catania", Bellini was the quintessential composer of bel canto opera. He died in Puteaux, France at the age of 33, nine months after the premiere of his last opera, I puritani.

Born in Catania, Sicily, Bellini was a child prodigy from a highly musical family and legend has it he could sing an aria of Valentino Fioravanti at eighteen months. He began studying music theory at two, the piano at three, and by the age of five could apparently play well. Bellini's first five pieces were composed when he was just six years old. Regardless of the veracity of these claims, it is certain that Bellini grew up in a musical household and that a career as a musician was never in doubt.

Having learned from his grandfather, Bellini left provincial Catania in June 1819 to study at the conservatory in Naples, with a stipend from the municipal government of Catania. By 1822 he was in the class of the director Nicolò Zingarelli, studying the masters of the Neapolitan school and the orchestral works of Haydn and Mozart. It was the custom at the Conservatory to introduce a promising student to the public with a dramatic work: the result was Bellini's first opera Adelson e Salvini an opera semiseria that was presented at the Conservatory's theatre. Bellini's next opera, Bianca e Gernando, met with some success at the Teatro San Carlo, leading to a commission from the impresario Barbaia for an opera at La Scala. Il pirata was a resounding immediate success and began Bellini's faithful and fruitful collaboration with the librettist and poet Felice Romani, and cemented his friendship with his favored tenor Giovanni Battista Rubini, who had sung in Bianca e Gernando.

Bellini spent the next years, 1827–33 in Milan, where all doors were open to him. Sparking controversy in the press for its new style and its restless harmonic shifts into remote keys, La straniera (1828) was even more successful than Il pirata, and allowed Bellini to support himself solely by his opera commissions. The composer showed the taste for social life and the dandyism that Heinrich Heine emphasized in his literary portrait of Bellini (Florentinische Nächte, 1837). Opening a new theatre in Parma, his Zaira (1829) was a failure at the Teatro Ducale, but Venice welcomed I Capuleti e i Montecchi, which was based on the same Italian source as Shakespeare's Romeo and Juliet.

The next five years were triumphant, with major successes including some of his greatest works, La sonnambula, Norma and I puritani, cut short by Bellini's premature death just nine months after the premiere of I puritani. Bellini left London for Paris, but never completed the journey back to Milan.

Bellini died in Puteaux, near Paris of acute inflammation of the intestine, and was buried in Père Lachaise Cemetery, Paris; his remains were removed to the cathedral of Catania in 1876. The Museo Belliniano housed in the Gravina Cruyllas Palace, in Catania, preserves memorabilia and scores.

The central relationship in Bellini's life was with Francesco Florimo, who came from a village close to Catania, and the two shared a close correspondence. After Bellini's death Florimo was treated as his spiritual heir.

In 1999, the Italian music publisher Casa Ricordi, in collaboration with the Teatro Massimo Bellini in Catania, embarked on a project to publish critical editions of the complete works of Bellini.