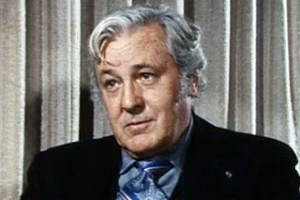 Melvin Mouron Belli (July 29, 1907 – July 9, 1996) was a prominent American lawyer known as "The King of Torts" and by detractors as 'Melvin Bellicose'. He had many celebrity clients, including Zsa Zsa Gabor, Errol Flynn, Chuck Berry, Muhammad Ali, the Rolling Stones, Jim Bakker and Tammy Faye Bakker, Martha Mitchell, Lana Turner, Tony Curtis, and Mae West. He won over USD $600,000,000 in judgments during his legal career.

Melvin Mouron Belli was born in the California Gold Rush town of Sonora, California in the Sierra foothills. His parents were of Italian ancestry from Switzerland His grandmother Anna Mouron was the first female pharmacist in California. By the 1920s, the family had moved to the city of Stockton, California where Belli attended Stockton High School.

Belli graduated from the University of California, Berkeley in 1929 and after traveling around the world for a year, attended the Boalt Hall School of Law at Berkeley in 1933. After graduation, his first job was posing as a hobo for the Works Progress Administration and riding the rails to observe the Depression's impact on the country's vagrant population. His first major legal victory came shortly after graduation, in a personal injury lawsuit representing an injured cable car gripman. Over insurance lawyers' objections, Belli brought a model of a cable car intersection, and the gear box and chain involved in the accident, to demonstrate to jurors exactly what had happened.

Besides his notorious personal injury cases, which earned for him his byname "King of Torts," Belli was also instrumental in setting up some of the foundations of modern consumer rights law, arguing several cases in the 1940s and 1950s that formed the basis for later lawsuits and landmark litigation by such figures as Ralph Nader. Belli argued (in cases such as Escola v. Coca-Cola Bottling Co., in 1944, which arose from an incident in which a restaurant manager from Merced, California was injured by an exploding Coca-Cola bottle) that all products have an implied warranty, that it is to be foreseen that products will be used by a long chain of people, not just the direct recipient of the manufactured product, and that negligence by a defendant need not be proven if the defendant's product is defective. Belli also was one of the first major attorneys to prominently use demonstrative evidence and courtroom exhibits (such as graphics, charts, photographs, and films).

In his book Ready for the Plaintiff, Belli noted examples of negligence cited by himself and other personal-injury lawyers to win in court—for example, a colleague in Florida, who showed how a builder violated a building code in Miami Beach concerning the use of wooden shims in construction of outside walls (forbidden by the municipal code because of the effect of the ocean salt and air). The facing was a slab of Vitreous marble, whose adhesion was eventually weakened by the climate; it fell off the side of the building and injured a passerby, who sued the builder. After winning a court case, Belli would raise a Jolly Roger flag over his Montgomery Street office building in the Barbary Coast district of San Francisco (which Belli claimed had been a Gold Rush-era brothel) and fire a cannon, mounted on his office roof, to announce the victory and the impending party.

In his best-known case, Belli represented Jack Ruby, for free, after Ruby shot and killed Lee Harvey Oswald. Belli attempted to prove that Ruby was legally insane and had a history of mental illness in his family. On Saturday, March 14, 1964, Ruby was convicted of 'murder with malice,' and received a death sentence. Immediately thereafter, Ruby and his siblings fired Belli as they also hired and fired several other lawyers during the case. In late 1966, Ruby's conviction was overturned with help from other defense lawyers on the grounds that he did not receive a fair trial and a retrial was scheduled outside of Dallas, but Ruby died of cancer before the retrial could take place. Belli became very critical of FBI Director J. Edgar Hoover; the agency compiled at least 367 pages of evidence about Belli's activities.

Belli's firm filed for bankruptcy protection in December 1995. Belli was representing 800 women in a class action lawsuit against breast implant manufacturer Dow Corning. Belli won the lawsuit, but when Dow Corning declared bankruptcy, Belli had no way to recover the $5,000,000 (USD) his firm had advanced to doctors and expert witnesses.

In the 1960s, Belli was among the leading members of the California plaintiffs bar who helped establish the California Trial Lawyers Association, which in the mid-1990s was renamed the Consumer Attorneys of California. The organization was established to help set standards and foment on-going legal education to help consumers have a better chance in court against the powerful legal teams amassed by the insurance companies and big corporations that typically were the defendants in accident, personal injury and other consumer lawsuits.

Belli appeared in numerous films and television shows, frequently as himself, and was played by Brian Cox in the 2007 film Zodiac (Belli received a letter from the Zodiac Killer in 1969).

In perhaps his best-known role, other than as himself, Belli appeared in a 1968 Star Trek episode, "And the Children Shall Lead." In it he appeared as Gorgan, an evil being who corrupted a group of children, one of whom was played by his son Caesar.

In 1970, he appeared in the Albert and David Maysles documentary Gimme Shelter, which featured his representation and facilitation of the Rolling Stones's staging of the disastrous December 6, 1969, Altamont Free Concert. Belli enjoyed his frequent television and movie appearances; in 1965, he told Alex Haley, interviewing him for Playboy, that he "might have been an actor" if he had not become an attorney. He also played a criminal defense lawyer in an episode of the series Hunter. In that episode he got three college students off the hook on charges of raping and murdering a fellow student at a party. The police were initially investigating the girls' death as a drug overdose when one suspect blurted a confession before police had an opportunity to read them their rights. The victim's older sister then embarked on a vigilante spree, killing two of the suspects before police stopped her just prior to killing the third.

Belli was the author of several books, including the six-volume Modern Trials (written between 1954 and 1960) which has become a classic textbook on the demonstrative method of presenting evidence. Belli's unprecedented—and some thought undignified—use of graphic evidence and expert witnesses later became common courtroom practice. His autobiography, My Life on Trial is an account of his life and the noteworthy events he was involved in during his career.

Belli was married six times and divorced five. His marriage to his fifth wife, the former Lia Georgia Triff ended with a scandalous and acrimonious divorce proceeding in 1988, in which Belli was fined $1000 for calling his wife "El Trampo," accused his wife of throwing their pet dog off the Golden Gate Bridge, and was ultimately compelled to pay her an estimated $15 million. She later married a self-styled Romanian prince, Paul Lambrino. Belli married his sixth wife, Nancy Ho, on March 29, 1996. His youngest child, Melia, from fifth wife Lia, became an art history scholar, and is currently an assistant professor of Asian art history at the University of Texas at Arlington.

Belli died of complications from pancreatic cancer, at his home in San Francisco, on July 9, 1996, aged 88. His death came suddenly, and in the presence of his wife Nancy. The New York Times quoted his publicist Edward Lozzi saying "He was sitting; he just stopped breathing", "Working with him was the highlight of my career. One of my proudest accomplishments was announcing to the media his billion dollar law suit against the tobacco industries in 1994. We connected Belli with Patrick Reynolds, anti-tobacco activist and grandson of the Head of RJ Reynolds. We also spread the classic quote from Belli about the tobacco industry's conspiracy to addict Americans. 'They grab you, hold you, addict you then kill you without the slightest remorse.' This quote was devastating to big tobacco and helped bring them down with the help of the Federal Food & Drug Administration (FDA)." As of his death he had three sons, three daughters, twelve grandchildren, and two dogs. He is buried in Odd Fellows Cemetery in Sonora, California, his birthplace.