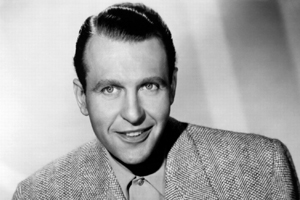 American actor on radio and TV with more than 400 stage roles and 100 movies. His career spanned eight decades in all, in which he acted with such ease and regal quality that he could do any role. In 1987, he was given an Honorary Oscar.

The son of a Chicago advertising executive, he did not care much for scholastics, but did well in the school drama club. At 15, he had a brief job as an extra on a film and it may well have been then that the acting bug bit him. He was expelled from school in his senior year for smoking under the stage, so he worked as a soda jerk, a store clerk and a fruit packer. He ran away from home at 17 and joined a Shakespearean theatre company where he learned to act during the '20s in stock productions. Working as a stage manager, he made $40 a week. Moving on to New York, he found that the big city was not ready for him and reached a point so low that he was living on peanuts, literally, and once stole a bottle of milk from a doorstep.

Bellamy continued to work in stock companies while haunting the offices of agents. Finally he won a role. His debut on the New York stage was in "Town Boy," 1929. It closed after two performances, but it led to a good job as leading man with a company in Rochester, playing opposite Helen Hayes. In 1931 he took his talent to Hollywood where he began to make a decent living in films such as "The Secret Six," "Second-Hand Wife" and "Air Mail."

During the early '30s, he and Charles Farrell bought 53 acres of Palm Springs land for $3,500 and built their own tennis courts. The property later became the Palm Springs Racquet Club, which Bellamy finally turned over to Farrell. In 1933, he became a founding director of the Screen Actors Guild and throughout his career was active in organizations designed to help actors.

His roles began to steadily improve. He returned to New York for stage work at times, co-produced and directed a melodrama and began doing a great deal of radio work. Altogether he had 16 successful years on Broadway.

Though he was working steadily, Bellamy was at a low point financially in 1949. A third divorce had hit him hard, along with medical bills for his daughter. It was then he was offered a play, "Detective Story." The play was a hit and led to his award-winning TV series, "Man Against Crime," that ran for five years.

His first of four marriages was on 7/06/1941 to 1945. His marriages to Alice Delbridge, Catherine Willard (with whom he had two kids) and Ethel Smith ended in divorce but the fourth, to Alice Murphy in 1949, lasted to his death. His friends remarked that he was always affable and kind. He kept physically fit, exercising at sunrise every morning.