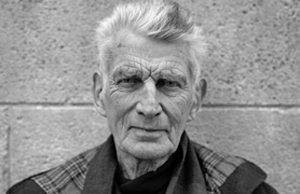 Irish author of prose, fiction and avant-garde plays, who established the contemporary theater of the absurd with his surrealistic "Waiting for Godot." He was awarded the 1969 Nobel Prize for literature, and reluctantly accepted it after having lobbied the Swedish Academy not to bestow it. At a time when much art was being expressed as a persistent cry of aloneness in giant homogenized cultures, few voices were as persistent on the subject as his. His characteristic despair, though laced with humor, was meted out in such plays as "Endgame," and "Krapp’s Last Tape," 1960, and in novels that including "Molloy," 1951, "Malone Dies" and "The Unnamable." Brooding and sardonic, he focused on the most abhorrent aspects of life, molding them into his own style, clearly haunted by spiritual desolation. He found writing difficult, "an unnecessary stain on silence and nothingness."

Beckett, who claimed he could remember being a fetus in the womb, was the youngest of two sons of a surveyor and a nurse. He had a conventional Irish Protestant upbringing. He studied classics in high school and attended Trinity College from 1923-1927, earning a B.A. degree in French and Italian. At 21, he moved to Paris, taking a teaching post and falling into the company of other literary expatriates, including James Joyce, a personal friend and inspiration for him.

His first published work was an essay in a collection of Joycean criticism issued by Shakespeare and Company in Paris in 1929 and published in England seven years later. His first published work under his own name was "Whoroscope," 1930. In 1930, he returned to Dublin to earn an M.A. degree at Trinity College and became an assistant in French there. He didn’t like teaching, or the conservative Irish life, and left Ireland, where he returned only for short visits. In 1931, his critical essay, "Proust" was published.

He settled permanently in Paris in 1937, and published a collection of short stories and a book of poems. When Paris was invaded by the Nazis, Beckett and his future wife, Suzanne Deschevaux-Dumesnil, went to the south of France, hiding by day and traveling by night. The trek was likely considered inspiration for his "Godot" character. Yet another dark inspiration - in 1938 - was a panhandler who stabbed him in the chest for no given reason, perforating a lung and just missing his heart. He published his novel "Murphy" the same year.

Throughout the ‘40s, he wrote in two languages, shifting from English to French in 1945. At the end of World War II, he was an interpreter at the Irish Red Cross Hospital, and then settled down in Paris to four years of concentrated writing of the works that would seal his reputation. He labored in obscurity until the 1951-1953 period when three novels appeared. His masterpiece trilogy was formed by the novels "Molloy," 1951, "Malone Muert," 1951, and "L’Innommable," 1953.

He married Suzanne in England on 3/25/1961, and they lived in separate apartments overlooking a prison exercise yard. Beckett enjoyed the piano, playing Scarlatti and Haydn, and liked to garden and observe wildlife.