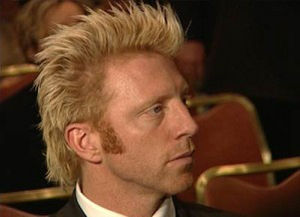 Boris Franz Becker (b. November 22, 1967 in Leimen, Germany) is a former World No. 1 professional tennis player from Germany. He is a six-time Grand Slam singles champion, an Olympic gold medalist, and the youngest-ever winner of the men's singles title at Wimbledon at the age of 17. Since he retired from the professional tour, media work and colourful aspects of his personal life have kept him in the headlines.
Becker is the only son of an architect, who built the tennis center (Blau-Weiss Tennisklub) where Boris learned the game. Becker turned professional in 1984 and won his first professional doubles title that year in Munich.

The orange-blond teenager took the sports world by storm in 1985. He won his first top-level singles title in June at Queen's Club and then, two weeks later, became the first unseeded player, the youngest-ever male, and the first German to win the Wimbledon singles title, defeating Kevin Curren in four sets. At the time, he was the youngest-ever male Grand Slam singles champion at 17 years, 7 months (a record broken by Michael Chang who won the French Open when he was 17 years, 3 months). Two months after his triumph, Becker became the youngest winner of the Cincinnati Masters.

Becker was back in the Wimbledon final in 1988, where he lost in four sets to Stefan Edberg in a match that marked the start of one of Wimbledon's great rivalries. Becker also helped West Germany win its first Davis Cup in 1988. And he won the year-end Masters in New York, defeating five-time champion Lendl 5-7, 7-6, 3-6, 6-2, 7-6.

1989 was possibly the pinnacle of Becker's career. He defeated Edberg in straight sets in the Wimbledon final and then beat Lendl in the U.S. Open. He also helped West Germany retain the Davis Cup, winning a long match in the quarterfinal round against Andre Agassi, 6-7, 6-7, 7-6, 6-4, 6-4. The World No. 1 ranking, however, still eluded him.

In 1990, Becker met Edberg for the third consecutive year in the Wimbledon final, losing a long five-set match.

Becker reached the final of the Australian Open for the first time in his career in 1991, where he defeated Lendl to finally claim the World No. 1 ranking. He was ranked No. 1 for several weeks during 1991, though he never managed to finish a year ranked as the World's No. 1 player.

Becker reached his fourth consecutive Wimbledon final in 1991, where he unexpectedly lost in straight sets to his German compatriot Michael Stich. Becker and Stich developed a long-standing fierce rivalry, the media often pairing up the raw, passionate Becker against the level-headed, suave Stich. However, Becker and Stich teamed up in 1992 to win the men's doubles gold medal at the Olympic Games in Barcelona.

Becker reached the Wimbledon final for the seventh time in 1995, where he lost in four sets to Pete Sampras. He won the year-end ATP Tour World Championships in Frankfurt with a straight-set win over Michael Chang in the final.

Becker's sixth and final Grand Slam title came in 1996, when he defeated Michael Chang in the final of the Australian Open. In that tournament, Becker delivered one of the funniest victory speeches in recent tennis history. When he listed his sponsors, he cut himself short saying that he did not have the whole day left. He then consoled Chang by saying that his (Becker's) days were numbered, while Chang was still a young guy.

Becker in 1994Becker lost to Sampras in the final of the 1996 ATP Tour World Championships in Hannover, Germany, 3-6, 7-6, 7-6, 6-7, 6-4. Becker saved two match points in the fourth set and held serve 27 consecutive times until he was broken in the penultimate game. Sampras, who had lost to Becker a month earlier in a five-set final in Stuttgart, later called Becker the best indoor player he ever faced.

In 1997, Becker also lost to Sampras in a quarterfinal at Wimbledon, in what many had thought would be Becker's final appearance there. In 1999, however, he again played at Wimbledon, losing in the fourth round to Patrick Rafter.

Becker was most comfortable playing on fast-playing surfaces, particularly indoor carpet (on which he won 26 titles) and grass courts. He reached a few finals playing on clay courts but never won a clay court tournament in his professional career. His best performances at the French Open were when he reached the semifinals in 1987, 1989, and 1991.

Over the course of his career, Becker won 49 singles titles and 15 doubles titles. Besides his six Grand Slam titles, he was also a singles winner in the year-end Tennis Masters Cup in 1988, 1992, and 1995, and at the Grand Slam Cup in 1996. He won a record-equalling four singles titles at London's Queen's Club. In Davis Cup, his career win-loss record was 54-12, including 38-3 in singles. He also won the other two major international team titles playing for Germany – the Hopman Cup (in 1995) and the World Team Cup (in 1989 and '98).

In 2003, Becker was inducted into the International Tennis Hall of Fame.

Becker occasionally plays on the senior tour and in World Team Tennis. He also commentates at Wimbledon for the BBC each year.

Playing style
Becker's game was based on a huge serve that earned him the nicknames "Boom Boom" and "Baron von Slam." His penchant to throw himself at every shot with diving volleys endeared him to the crowds. His heavy forehand and powerful return of serve were also very significant factors in his game. For much of his career, Becker was the crown prince of the singles world rankings, spending long periods ranked as World No. 2, mostly behind Ivan Lendl and Stefan Edberg. He was ranked No. 1 for a total of 12 weeks.

Becker was notorious for his frequent emotional outbursts on court. Whenever he played badly, he would loudly swear at himself, and sometimes even smashed his rackets on court. However, in contrast to John McEnroe, he rarely showed aggression toward his opponents. His raw displays of emotions made him a crowd favourite. Becker's highly dramatic play spawned a plethora of new expressions, such as the Becker Blocker (his trademark early return shot), the Becker Hecht (his flying lunge), the Becker Faust ("Becker Fist"), the Becker Shuffle (the dance he sometimes performed after making important points) and Becker Säge ("Becker Saw" – referring to the way in which he famously pumped his fists in a sawing motion).

Becker's high-power tennis made him one of the most dangerous lawn and hard court players, but he was notoriously ineffective on clay. He never won a top-level singles title on clay. Becker and Stich, however, won the men's doubles Olympic gold medal in 1992 on clay.

Personal life
On December 17, 1993, Becker married the actress and designer Barbara Feltus, the daughter of an African American serviceman and a white German woman. A month later, their son Noah was born. He was named after Becker's friend Yannick Noah. Their second child, Elias, was born in September 1999. Before the marriage, they shocked Germans by posing nude for the cover of Stern (the picture was taken by her father). After the shock of their coupling faded, Boris and Barbara became the model for a New Germany. Becker gained the respect of his countrymen for his stance against racism and intolerance.

However, all that changed when he asked Barbara for a separation. Becker claimed he merely wanted some time out. But she flew to Miami, Florida, USA a week later with Noah and Elias and filed a petition in Miami-Dade County Court, sidestepping their prenuptial agreement, which had entitled her to a single $2.5 million payoff. The January 2001 pretrial hearing was broadcast live to Germany. Becker was granted a divorce on January 15, 2001. She got a $14.4 million settlement, their condo on the exclusive Fisher Island, and custody of Noah and Elias.

On February 8, 2001, DNA test results forced Becker to admit paternity of a daughter, Anna (b. March 22, 2000), by Russian-African waitress Angela Ermakova. He at first denied paternity, and his lawyers suggested that Ermakova was part of a blackmail plot devised by the Russian Mafia. Nonetheless, in July 2001, he agreed to pay $5 million. As of April 2006, he was expressing huge joy from his relationship with this daughter.

Becker was convicted of tax evasion on October 24, 2002, when he admitted that he lived in Germany from 1991–93 while claiming to reside in Monte Carlo. He was given two years probation, fined $500,000, and ordered to pay all court costs.

Since October 2005, Becker has been a team captain on the British TV sports quiz show They Think It's All Over.

Becker speaks with a distinctive lisp and the Heidelberg region intonation. He is notorious for saying regularly ääh, ääh. He has been constantly mocked by comedians for this.

He is a fan of German football club Bayern Munich and serves on its advisory board together with, among others, Bavarian Premier Edmund Stoiber. He is also a fan of Chelsea FC.

He is not related to Benjamin Becker, an ATP tour player who also comes from Germany and who defeated Andre Agassi at the 2006 U.S. Open.