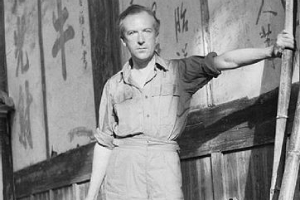 British-American noted photographer, stage and Oscar-winning film designer and author, noted for photographs of society, film stars and other celebrities and one-time official photographer to the British royal family. He was also an author and diarist, frequently supplementing his photos with text.

The son of a London timber importer, Beaton was educated at Harrow and Cambridge and graduated at age 19 with two hobbies: painting and photography. He had learned to paint in sketching class and evolved his own style from the basics.

He came to the United States in 1928, and his first exhibition was in January 1929 when his work caught the attention of New York’s glitterati. He had two successful shows at the Delphic Studio in New York in 1931, and by that time was photographing Hollywood film stars.

Beaton was very interested in photographing costumes and architecture, and he contributed to Harper’s Bazaar, Vanity Fair, Life and Vogue. He naturally evolved to stage designer, and made his debut in that field in 1936. A producer gave him total artistic control to do scenery and costumes for his productions. "The First Shoot" was a stage play that had its first performance 12/23/1935, and Beaton’s work was given good reviews.

In January 1938, he was disgraced when microscopic lettering on a small corner of a sketch he submitted for the February issue of Vogue was enlarged by columnist Walter Winchell, who broadcast to the nation that it contained slurring comments on Jewish members of the Hollywood film producer set. Beaton called the whole thing "an aberrance" and resigned as contributing photographer and artist for Vogue. The lettering had never been intended for publication, and had been comments Beaton had written after viewing a film he disliked.

With the start of World War II, Beaton was assigned to the British Ministry of Information to collect material and take documentary photographs for special government reports. This assignment produced several books, some official and some privately published. "Air of Glory," came out in 1941, followed by "History Under Fire," "Time Exposure" and "Winged Squadrons." In March 1942 Beaton was loaned to the Air Ministry for three months to photograph the Middle East, and "The Near East" came out of this in 1943.

Beaton also wrote fiction. "My Royal Past" is an example of an as-told-to book, a satiric commentary on royal diarists and biographers.

In later years, Beaton did film design, and won an Oscar in 1963 for costumes and photography in the movie, "My Fair Lady." In 1962, he became the first Englishman to be invited by the Comedie Francaise to design for its production of "School for Scandal."

Knighted in 1972, Beaton suffered a severe stroke in 1974, but he taught himself to draw, paint and photograph with his left hand, and he resumed photography three years later. He died 1/18/1980.