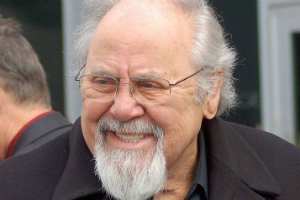 Chris Bearde (born 18 June 1936) is a comedy writer, producer and director best known for his work as a writer on the '60s zeitgeist hit Laugh In and for co-writing and producing TV specials for Elvis Presley, Bob Hope, Sonny and Cher, Bill Cosby, Steve Martin, Jim Carrey, Andy Williams, The Jackson Five, The Osmonds, Dinah Shore, Diana Ross, and Lucille Ball. He also created the format for the original Gong Show and a number of network and pay-cable comedy series including That's My Mama and Sherman Oaks.

Chris Bearde's career started in the 1950s in Sydney, Australia. After working in radio and serving two years in the Australian Army, at 23 he became host of the children's television series Smalltime. His appearances in this show and his writing for other Australian comedy shows was recognised by visiting Canadian and American producers, and Bearde was contracted by the Canadian commercial network CTV to write a comedy series in the early 1960s, entitled Network. He created two shows for the Canadian Broadcasting Corporation, Front and Centre and Canada's first late night political satire show Nightcap.

After four years of working in Canadian radio and television, Bearde was signed by the William Morris Agency and moved to Hollywood. There he created formats for several specials for NBC and ABC. Bearde's method of combining slapstick and political satire made him a resident writer on the original Laugh In.

While working with the producer of Laugh In, George Schlatter, Bearde created the formats for specials, including Like Hep with Dinah Shore and The Grammy Awards. In 1968, he formed a partnership with Canadian producer Allan Blye and they created the format for the 1968 TV special Singer Presents Elvis for producer Bob Finkel and director Steve Binder. Bearde and Blye co-produced several specials for Andy Williams and produced two years of The Andy Williams Show from 1969 to 1971. Blye and Bearde also created a summer series, The Who Is Ray Stevens Show, which featured the first appearance of Steve Martin. Blye and Bearde also created and produced one of the first black situation comedies, That's My Mama, for ABC.

After splitting with Blye, Bearde created the format and produced with Chuck Barris The Bobby Vinton Show and the first major breakthrough talent reality television show, The Gong Show. Although Bearde later sold his interest in the '70s version of the program to Barris, Bearde's company produced a one-season revival of the show in 1988. He also produced The Bob Hope Christmas Show and returned to Australia to produce Texaco Presents Bob Hope in Australia.

Bearde formed a long-term partnership with Dick Clark and produced The Half Hour Comedy Hour, which featured the first national appearance of Arsenio Hall as a host. Clark and Bearde co-produced Bearde's lip sync hit series Puttin' on the Hits in 1985.

In 2005, Bearde moved his operation to Las Vegas and created and trademarked "Chris Bearde's International Comedy Hall of Fame", a 30,000 sq ft (3,000 m2) entertainment retail restaurant and comedy tribute exhibition complex, currently in the design and planning stages. Each year there are several Comedy Awards and Induction Ceremony TV specials included in the package.

Bearde has received an Emmy Award, a Golden Globe Award, and a Writers Guild of America Award.

The Chris Bearde School of Comedy was created in Las Vegas in 2007 and moved to Los Angeles in 2008. The school is currently in operation and has just completed its first LA class with a graduation showcase at the Comedy Central Stage at the Hudson in Hollywood. New classes begin each month.