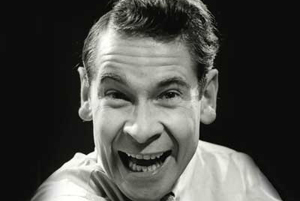 Stanley Baxter, (born 24 May 1926, Glasgow, Scotland) is a comic actor and impressionist, best known for his UK TV shows.

The son of an insurance manager, Baxter was educated at Hillhead High School, Glasgow and schooled for the stage by his mother. He began his career as a child actor in the Scottish edition of the BBC's Children's Hour. He developed his performing skills further during his National Service with the Combined Services Entertainment unit, working alongside the likes of comedy actor Kenneth Williams, film director John Schlesinger and dramatist Peter Nichols, who used the experience as the basis for his play Privates on Parade.

Baxter's self-titled series were enjoyed by enormous audiences and the later shows were memorable for the high quality of their production. The cost in terms of sets, effects and extras for these spectacular programmes resulted in Baxter's sacking in turn by the BBC and London Weekend Television.

“Parliamo Glasgow”
Perhaps his most memorable routine is “Parliamo Glasgow”. Conceived as being written by a fictitious scholar visiting Glasgow, the sketch took the patois of Glasgow and developed it to marvellous comic effect. This sketch was included in one of his BBC Scotland series in the 1960s and was based on the corporation's first venture into language programmes namely 'Parliamo Italiano' - 'Let's speak Italian'. The scene which most people remember is when he goes to the local market and says to the trader "Izat a marra on yer barra, Clara?", which he then translates into plain English as "Is that a marrow on your barrow, Clara?". Another introduced the Glaswegian word "Sanoffy", as in "Sanoffy cold day" ("It's an awfully cold day").

Other Television Roles
He guest starred in one of the episodes of The Goodies and later appeared in the lead role in Mr Majeika, developed from the books by Humphrey Carpenter, a children's show about a magic teacher, expelled from Walpurgis (the wizard land) for failing his professional examinations. He later stated that he had wished to retire after his spectacular hour-long shows had been axed and that the move to children's television was a "purely financial" arrangement. Baxter returned from his 10-year retirement for a one-off Christmas 2008 special for ITV. It will contain a mix of archived and new material, with celebrity comedians commenting on how Baxter influenced their lives .

After the war Baxter returned to Glasgow taking to the stage for three years at Glasgow’s Citizens Theatre before moving to London to work in television in 1959. In 1969 he performed in the original production of Joe Orton's then controversial farce What The Butler Saw at the Queen's Theatre in the West End with Sir Ralph Richardson, Coral Browne and Hayward Morse. His exacting and demanding nature gave Scotland some of its most glittering pantomimes and Baxter nurtured the stage careers of Alyson McInnes, John Ramage and Euan McIver, who Baxter recalled "has a voice just like mine" Glasgow Evening Timesas his understudy and stage stage stand in. Baxter remained a great favourite on the Scottish pantomime circuit up until his retirement in 1991, starring with popular Scottish stars, Jimmy Logan and Una McLean.

Working with director Neil Cargill, he then returned to radio by taking the role of Noël Coward in the BBC World Service Play of the Week, Marvellous Party, written by Jon Wynne-Tyson, it also starred Dorothy Tutin as Coward's lifelong friend, Esme Wynne-Tyson (Jon's mother). Also with Cargill, he read Whisky Galore and Jimmy Swan - The Joy Traveller for BBC Radio, providing the voices of all the characters.

Film Appearances
Baxter has appeared in a number of films, including Geordie (1955), Very Important Person (1961), The Fast Lady (1962), Crooks Anonymous (1962) and Father Came Too! (1963), the last three alongside James Robertson Justice, together with the animation Arabian Knight (1995). He often played a fiercely nationalistic Scot, as in Very Important Person, a POW escape comedy where a stereotypical Nazi officer (also played by Baxter!) calls him "Englischer Schwein", Baxter responding "Scottish swine!!"

Authorship
He has penned a number of books based on the language of Glasgow, as developed in his Parliamo Glasgow sketch as above, and on humour of the city.

Personal life
Stanley Baxter was married for 46 years. His wife Moira died in 1997.