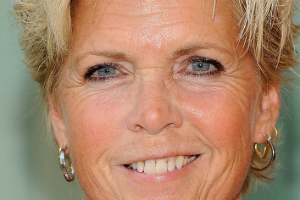 American actress, the daughter of actress-model Whitney Blake and radio announcer Ted Baxter, growing up in Hollywood in her show business family. Still a child when her folks divorced, she had two step-fathers, both in the business. Shy as a kid, she had no aspirations for acting. She married at 19 for three years during which she had two kids. She then needed a job, and took advantage of her natural environment as a Hollywood native.

In 1982, she began her starring role in the series "Family Ties," a hit series that ran to 1989. A feisty, gifted actress, she found her best medium in TV, with four series and many TV movies.

Baxter met David Birney during "Bridget," and they married in April 1974. Along with her two kids, she and David had daughter Kate in the '70s and twins on 10/02/1984. The marriage broke down due to conflicting schedules and interests and she filed for divorce in February1989. On 10/21/1995, she married screenwriter Michael Blodgett, 55. She filed for divorce from Blodgett in May 2000, citing irreconcilable differences.

Baxter works for the Pediatric AIDS Foundation in Santa Monica as a public service contribution, and has narrated a short film "A Gift of Time," for PAF about kids and their family confronting AIDS. While married to Birney, they were co-chairs of the American Diabetes Association, for which they worked industriously all year.

Baxter has appeared in some 40 made-for-TV movies and has launched a skin-care line in 2000. She has also appeared in a couple of episodes of "Spin City" as Fox's mom and played across from Gross in the onstage performance of "Love Letters."