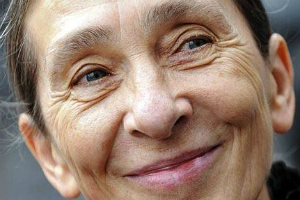 German dancer, choreographer and ballet director, mastermind of the company that changed the face of post modern dance. She is considered to be the contemporary leading exponent of dance theatre in Germany, directing the Wuppertal Dance Theatre from 1973.

Bausch was a shy and fearful child, raised by parents who ran a modest hotel cafe in Solingen. She remembers speaking seldom. Taken to an exercise dance class, she was singled out for praise and filled with pride; all her dreams from then on were of the theater. She began with ballet classes, then studied under Kurt Joos, the great German choreographer. At 19, she went to Juilliard in New York. She studied at the Essen Folkwang School, and danced with the Folkwang Ballet, the New American Ballet and the Met Opera House Ballet.

Gaunt and 5'7", with a pale, angular face, she tends to wear men's trousers and an oversized coat in her signature black. Her productions are distinctive, bold and vital, with highly original signatures. In 1984 her company made its U.S. debut at the Los Angeles Olympic Arts Festival. Bausch lives in her art and demands that her people do so as well. Her scripts spring from close collaboration with the dancers, who go through group mind exercises in order to dredge up material that gives depth to the movement. The sets and music are given as precise attention, and the completed production becomes transformed, greater than the sum of its parts.

Her first set designer, the brilliant Rolf Borzik, was her great love and mentor and she lived with him until he died of cancer in 1980. Reclusive and anxious, when she began her state-supported company, she confessed to terror at the challenge. What emerged was a strange, dream-like, violent, disturbing form of dance theater that eventually influenced her generation.