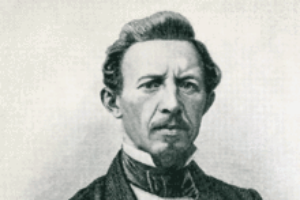 In 1850 Bauer built his first submarine, Le Plongeur-Marin (“The Marine Diver”), which in February 1851 sank in 50 feet (15 m) of water during a test dive in Kiel Harbour, trapping Bauer and his two crewmen. Although Bauer realized the hatch could be opened when the pressure of the air inside the hull, compressed by water leaking into the submarine, matched the water pressure outside, he had difficulty preventing his crew from panicking. When the pressure was at last equalized, the hatch was opened and the men swam to the surface, emerging, after 7 1/2 hours below, in the midst of their own funeral services.

In 1855, sponsored by Grand Duke Constantine of Russia, Bauer built the 52-foot iron submarine Le Diable-Marin (“The Marine Devil”), carrying a crew of 11, 4 of whom worked a treadmill that drove a screw propeller. Through windows in this submarine Bauer made what were probably the first underwater photographs. He also experimented with underwater sound for signaling and with a system for purifying the air in submerged craft.

Discouraged by conservative naval officers, Bauer left Russia in 1858 but was unable to find other sponsors. In 1869 ill health forced his retirement in Munich.