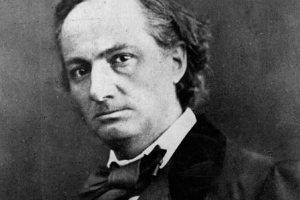 French poet tormented by religion and the struggle between good and evil in man, suffused with his deeply Catholic sense of sin and remorse. His "Flowers of Evil" was condemned as immoral in 1857, confiscated by authorities for offending public morals. He was a Catholic and a Satanist, a debauchee and mystic, cynical sensualist and yearner for purity. Sexually morbid and a sadist, he sought the unbathed women "of the streets."

In his extraordinarily complicated life, he had a suffocatingly intimate relationship with his bewildered mother, who lovingly nurtured and then callously ignored his lifelong dependence on her which reached classically Oedipal proportions. He was the son of a lapsed Catholic priest, a roué and cultured epicurean who passed on to his son his love of art. After his dad died in 1827, his mom married Col. Jacques Aupicki, a dour career diplomat who, disgusted by his high-strung stepson's eccentricities, tried to impose military standards of discipline and conduct, values that Baudelaire disavowed in a rebellion that lasted the rest of his life.

By the time he came into his inheritance from his birth father in 1842, he was already exorbitantly precocious and foppish, squandering over a half of his considerable fortune in 18 months. His taste ran to elegant fashion, and he would have gone through the entire amount had not his stepfather brought the spending spree to a halt with legal intervention. Much to his humiliation, Baudelaire was then forced to petition an attorney for his funds, cap in hand, living on a meager monthly allowance.

His spending spree was the only time in his short and miserable life that he was ever without financial stress. His writings were not only scandalous, but paid poorly, and he once remarked that his income for years was the equivalent of the price of two cigars a day.

He lived in dilapidated fleabag hotels, eking out a precarious existence as a poet, art critic and translator of Edgar Allan Poe. He changed his address in Paris about 30 times during his adult life, once moving six times in a single month in 1885, seeking to evade creditors.

Baudelaire's "Les Fleurs du Mal," came out in 1857, unleashing a fire storm of criticism and nearly a century of acrimonious litigation.

Addicted to ether capsules and laudanum (opium), he sought to numb himself to the ravaging effects of syphilis, contacted in the Paris Latin Quarter as a young man. He was a cynical voluptuary, an amoral aesthete who shocked his friends by dying his hair green and sprinkling his conversation with non sequiturs. He referred to "the intoxicating pleasure of displeasing," as he refused any semblance of conventionality but formed a lifelong liaison with Jeanne Duval, the "Black Venus" of his "Fleurs," a mixed-race drug-addicted prostitute.

The first signs of insanity appeared in 1862. In his final years his skin was discolored and his joints affected. He collapsed in March 1866 while admiring an architectural point of beauty with friends in Belgian. He returned to Paris in a private railroad car some months later and over the next 12 months suffered a slow death from syphilis (GPI). By early 1867 he scarcely remembered his own name; by April he had lost his will to live and on 8/31/1867, he died in his mother's arms in Paris.