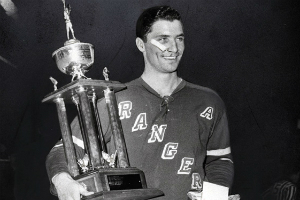 Andy Bathgate was a popular star player of the New York Rangers and also holds the honour of being declared the MVP of both the NHL and WHL. He started his professional career with the Cleveland Barons of the AHL in the 1952–53 season. He bounced between the Vancouver Canucks and the Rangers for two seasons before settling with the Rangers in 1954–55. He played 10 full seasons with the Rangers, where he became a popular player in New York as well as a top-tiered player in the NHL.

In December 1959, Bathgate authored a controversial complaint about a "bloodsport" tendency he felt was discrediting the game:

"....Players in the old N.H.L. routinely tried to injure one another, and whether or not they stood up for teammates in such instances, it got so bad that in 1959 the Rangers’ Andy Bathgate was compelled to write an article for True magazine, headlined “Atrocities on Ice.” As this post from the blog Fellowship of Hockey relates, Bathgate’s article actually named the league’s guiltiest parties when it came to spearing: Montreal’s Doug Harvey and Tom Johnson, Boston’s Fern Flaman, Chicago’s Ted Lindsay and Pierre Pilote, and Lou Fontinato from Bathgate’s own Rangers. “None of them seems to care that he’ll be branded as a hockey killer,” Bathgate wrote — for which the N.H.L. fined him and installed a rule, still in force, prohibiting players from writing articles of this nature..."

In 1961–62, Bathgate and Bobby Hull led the league in points, but Bathgate lost the Art Ross Trophy to Bobby Hull because Hull had more goals.

Andy Bathgate's career was frustrated by the mediocre play of the Rangers and a nagging knee problem. He was traded to the Toronto Maple Leafs during the 1963–64 season, where he immediately helped Toronto to a Stanley Cup championship, and later was dealt to the Detroit Red Wings, where he helped the team reach the Stanley Cup Finals in 1965–66. Bathgate was chosen by the Pittsburgh Penguins in the 1967 NHL Expansion Draft, and after one season, he returned to the Canucks where he would help lead the team to two consecutive Lester Patrick Cup victories, in 1969 and 1970. His best professional year was with them, where he scored 108 points in 1969–70. That performance gave him the George Leader Cup, the top player award in the WHL. Andy Bathgate's final NHL year was with the Penguins in 1971; 1971–1972 he was playing coach for HC Ambri-Piotta in Switzerland. He came briefly out of retirement three seasons later to play for the Vancouver Blazers of the WHA, which he had coached the previous season, but retired for good after 11 games.

Andy Bathgate won the Hart Memorial Trophy for the MVP of the NHL in 1958–59 after scoring 40 goals, which was no easy feat in that era. He is famous for contributing to one of the greatest innovations in NHL history. Renowned for the strength of his slapshot, during a game against the Montreal Canadiens, Bathgate shot the puck into the face of Jacques Plante, forcing Plante to receive stitches. When Plante returned to the ice, he was wearing a mask. That started a trend that continues to this day.

Bathgate currently owns and manages a 20-acre (81,000 m2) driving range in Mississauga, Ontario. During the winters he helps coach his grandson's hockey team. He has also stated that he is unlikely to play in any more old-timer's games, citing recent hip surgery. "Those old fellas get too serious. They'll start hooking you."

The Rangers retired his #9 along with Harry Howell's #3 in a special ceremony before the February 22, 2009, match against the Maple Leafs. Bathgate joined Adam Graves, whose #9 had been hoisted to the Madison Square Garden rafters 19 nights earlier. Graves called Bathgate "the greatest Ranger to ever wear the #9".

His grandson and namesake, Andy Bathgate, born 26 February 1991, was drafted by the Pittsburgh Penguins in the 2009 NHL Entry Draft. He currently plays for the Plymouth Whalers of the Ontario Hockey League. His rights were relinquished by the Penguins on May 31, 2011, making him eligible to re-enter the 2011 NHL Entry Draft, though he went undrafted. Bathgate was invited to the New York Rangers' 2012 prospect camp for a tryout.