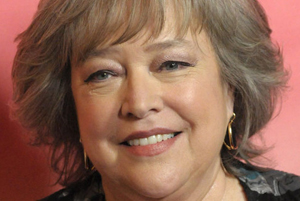 Early life
Bates was born in Memphis, Tennessee to Bertye Kathleen (Talbot), a homemaker, and Langdon Doyle Bates, a mechanical engineer. Her great-great-grandfather was an immigrant from Ireland to New Orleans and served as President Andrew Jackson's doctor. She has two older sisters, Mary and Patricia. Bates graduated from White Station High School in Memphis. She attended Southern Methodist University, majoring in theatre and was a member of Alpha Delta Pi sorority, and graduated in 1969. She moved to New York City in 1970 in order to pursue an acting career.

Career
One of her first films was the Dustin Hoffman film Straight Time. In 1990, she would appear again with Hoffman in Warren Beatty's Dick Tracy as a stenographer who couldn't understand the mumbling of Hoffman's character, Mumbles. Bates appeared off-Broadway in Terrence McNally's 1987 play Frankie and Johnny in the Claire de Lune, performed in little-seen films such as Summer Heat and The Morning After, and guest-starred in television shows such as L.A. Law before landing the role of obsessed fan Annie Wilkes, who holds her favorite author (played by James Caan) captive, in the 1990 thriller Misery, which was based on the novel of the same name by Stephen King. She received her first Academy Award nomination for that role, winning Best Actress. Soon after, she starred with Jessica Tandy in the acclaimed 1991 movie Fried Green Tomatoes. In 1995, she turned in another applauded portrayal as the title character in Dolores Claiborne, although she was surprisingly not nominated for an Oscar. She also excelled in her role as the acid-tongued "dustbuster" political advisor Libby Holden in the 1998 Primary Colors, which was adapted from the book in which political journalist Joe Klein recounted his experiences on the Presidential campaign trail in 1991-1992. For this performance, she received her second Academy Award nomination, for Best Supporting Actress, though she did not win. She was nominated again, in 2002, for About Schmidt, though again, she was denied the award. Bates did her first nude scene at the age of 43 in the 1991 film, At Play in the Fields of the Lord (1991) and again for a scene in About Schmidt.

Her Broadway appearances include Lanford Wilson's Fifth of July and the Robert Altman-directed Come Back to the Five and Dime, Jimmy Dean, Jimmy Dean opposite Karen Black and Cher. She received a Tony Award nomination in 1983 for her stage role in the Pulitzer Prize-winning play 'night, Mother opposite Anne Pitoniak. The production of 'night, Mother ran over a year. One of her other successful New York stage productions was, Off-Broadway, in Terrence McNally's Frankie and Johnny in the Clair De Lune which ran 533 performances. McNally specifically wrote the play for Bates and F. Murray Abraham, who had to drop out and was replaced by Kenneth Welsh. The film version, with the title shortened to Frankie and Johnny starred Al Pacino and Michelle Pfeiffer despite the fact that the play was the romance of "ordinary" looking people. In addition, numerous other parts were added, whereas the stage version was basically a two-performer play.

Starting in the 1990s, Bates forged a formidable career as a director. She has directed episodes of Homicide: Life on the Street, NYPD Blue, Oz, Six Feet Under, and Everwood. Bates has also directed the TV movies Dash and Lilly and the self-starring Ambulance Girl. In 2007, Bates will direct and also star in Have Mercy opposite Melanie Griffith.

Personal life
In 1991, Bates married actor Tony Campisi, with whom she had lived for 12 years previously. They divorced in 1997.

Bates is the Executive Committee Chair of the Actors Branch of the Academy of Motion Picture Arts and Sciences Board of Governors.

Her nickname is Bobo. She was often mistaken for comedian Roseanne Barr, who in turn spoofed Bates' role in Misery in a Saturday Night Live sketch.