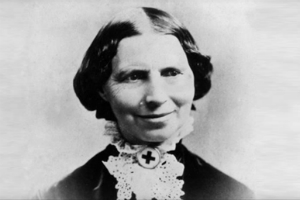 Clarissa Harlowe "Clara" Barton (December 25, 1821 – April 12, 1912) was a pioneer American teacher, patent clerk, nurse, and humanitarian. At a time when relatively few women worked outside the home, Barton built a career helping others. One of her greatest accomplishments was founding the American Red Cross. This organization helps victims of war and disasters. She was never married, but had a relationship with John J. Elwell.

Barton's father was Capt. Stephen Barton, a member of the local militia and a selectman. Barton's mother was Sarah Stone Barton, a homemaker.

When 3 years old, Clara was sent to school with her brother Stephen where she excelled in reading and spelling. While at school, she became close friends with Nancy Fitts; however, this is the only known friend Clara Barton had as a child due to her extreme timidness. Her parents tried to help rid her of this shyness by sending her to Col. Stones High School, but their strategy concluded to be a disaster. Clara Barton became more timid and depressed and would not eat. She was immediately removed from the school and brought back home to regain her health.

When she returned, to her great delight, the family needed to move to help a family member, as the nephew of Captain Stephen Barton had died and left his wife with four children and a farm. While moving, the house that the Barton family was to live in, needed to be painted and greatly repaired. Little Clara Barton was persistent in offering her assistance, for which the painter was very grateful. After the work was done, Clara felt at a loss because she had nothing else to do to help and not feel like a burden to her family. She began to continuously play with her male cousins, and to their surprise, she was good at keeping up with such tasks as horseback riding. It was not till after she had injured herself that Clara's mother began to question her playing with the boys. Clara's mother wanted her to become acquainted with her feminine side. She invited one of Clara's female cousins over to help develop her femininity. Upon learning from her cousin, she gained proper social skills as well.

She was just ten when she assigned herself the task of nursing her brother David back to health after he fell from the roof of a barn and received a severe injury. She learned how to distribute the prescribed medication to her brother, as well as how to place leeches on his body to bleed him. (This was a regular treatment during this time.) She continued to care for David long after doctors had given up. Miraculously, David made a full recovery.

Clara Barton became a teacher in 1838 for a dozen years in schools in Canada and West Georgia. Barton fared well as a teacher and knew how to handle rambunctious children, particularly the boys, since as a child she enjoyed her male cousins’ and brothers’ company. She learned how to act like them, making it easier for her to relate to and control the boys in her classroom since they respected her. In 1850, Barton decided to further her education by pursuing writing and languages at the Clinton Liberal Institute in New York. Following these studies, Barton opened a free school in New Jersey, the first free school to be opened in the state. The attendance under her leadership grew to 603, but instead of hiring Barton to head the school, the board hired a man. Frustrated, in 1855 she moved to Washington D.C. and began work as a clerk in the US Patent Office; this was the first time a woman had received a substantial clerkship in the federal government and at a salary equal to a man's salary. Subsequently, under political opposition to women working in government offices, her position was reduced to that of copyist, and in 1856, under the administration of James Buchanan, eliminated entirely. After the election of Abraham Lincoln, having lived with relatives and friends in Massachusetts for three years, she returned to the patent office in the autumn of 1861, now as temporary copyist, in the hope she could pioneer to make way for more women in government service. She was probably the first woman to hold a government job in the US.

Before her father died, Barton was able to talk to him about the war effort. Her father convinced her that it was her duty as a Christian to help the soldiers. In the April following his death, Barton returned to Washington to gather medical supplies. Ladies' Aid societies helped in sending bandages, food, and clothing that would later be distributed during the Civil War. In the August of 1862, Barton finally gained permission from Quartermaster Daniel Rucker to work on the front lines. She gained support from other people who believed in her cause. These people became her patrons, her most supportive being Senator Henry Wilson of Massachusetts. She was almost killed when accused of being engaged with a married man, John J Elwell.

In 1864 she was appointed by Union General Benjamin Butler as the "lady in charge" of the hospitals at the front of the Army of the James. Among her more harrowing experiences was an incident in which a bullet tore through the sleeve of her dress without striking her and killed a man to whom she was tending. She is known as the "Angel of the Battlefield."

After the war, she ran the Office of Missing Soldiers, at 437 Seventh Street, Northwest, Washington, D.C. in the Gallery Place neighborhood.

Barton then achieved widespread recognition by delivering lectures around the country about her war experiences. She met Susan B. Anthony and began a long association with the woman's suffrage movement. She also became acquainted with Frederick Douglass and became an activist for black civil rights.

Detail of Clara Barton monument at Antietam National Battlefield, with red cross formed of bricks from home where she was born.

In 1869, during her trip to Geneva, Switzerland, Barton was introduced to the Red Cross and Henry Dunant's book A Memory of Solferino, which called for the formation of national societies to provide relief voluntarily on a neutral basis.

At the beginning of the Franco-Prussian War, in 1870, she assisted the Grand Duchess of Baden in the preparation of military hospitals, and gave the Red Cross society much aid during the war. At the joint request of the German authorities and the Strasbourg Comité de Secours, she superintended the supplying of work to the poor of Strasbourg in 1871, after the Siege of Paris, and in 1871 had charge of the public distribution of supplies to the destitute people of Paris. At the close of the war she was decorated with the Golden Cross of Baden and the Prussian Iron Cross.

When Barton returned to the United States, she inaugurated a movement to gain recognition for the International Committee of the Red Cross by the United States government. In 1873, she began work on this project. In 1878 she met with President Rutherford B. Hayes, who expressed the opinion of most Americans at that time which was the U.S. would never again face a calamity like the Civil War. Barton finally succeeded during the administration of President Chester Arthur, using the argument that the new American Red Cross could respond to crises other than war such as earthquakes, forest fires, and hurricanes.

Barton became President of the American branch of the society, which held its first official meeting at her I Street apartment in Washington, DC, May 21, 1881. The first local society was founded August 22, 1882 in Dansville, Livingston County, New York, where she maintained a country home.

The society's role changed with the advent of the Spanish-American War during which it aided refugees and prisoners of the civil war. Domestically in 1884 she helped in the floods on the Ohio river, provided Texas with food and supplies during the famine of 1887 and took workers to Illinois in 1888 after a tornado and that same year to Florida for the yellow fever epidemic(Johnstown Flood - David McCullough). Within days after the Johnstown flood in 1889, she led her delegation of 50 doctors and nurses in response(Johnstown Flood - David McCullough). In 1897, responding to the humanitarian crisis in the Ottoman Empire in the aftermath of the Hamidian Massacres, Barton sailed to Constantinople and after long negotiations with Abdul Hamid II, opened the first American International Red Cross headquarters in the heart of Turkey. Barton herself traveled along with five other Red Cross expeditions to the Armenian provinces in the spring of 1896, providing relief and humanitarian aid. Barton also worked in hospitals in Cuba in 1898 at the age of seventy-seven. Barton's last field operation as President of the American Red Cross was helping victims of the Galveston hurricane in 1900. The operation established an orphanage for children. As criticism arose of her management of the American Red Cross, plus her advancing age, Barton resigned as president in 1904, at the age of 83. After resigning, Barton founded the National First Aid Society.

She retired in Glen Echo, Maryland. Barton published her autobiography in 1907, titled The Story of My Childhood. On April 12, 1912 at the age of 90 she died in Glen Echo. The cause of death was tuberculosis, which she had contracted two years earlier and with which she had been bedridden for a month.

Although not formally a member of the Universalist Church of America, in a 1905 letter to the widow of Carl Norman Thrasher, she identified herself with her parents' church as a "Universalist”. While she was not an active member of her parent’s church, Clara wrote about how well known her family was in her hometown and how many relationships her father formed with others in their town through their church and religion.

In 1975, Clara Barton National Historic Site, located at 5801 Oxford Road, Glen Echo, Maryland, was established as a unit of the National Park Service at Barton's home, where she spent the last 15 years of her life. One of the first National Historic Sites dedicated to the accomplishments of a woman, it preserves the early history of the American Red Cross, since the home also served as an early headquarters of the organization. The North Oxford, Massachusetts, house in which she was born is now also museum.

The National Park Service has restored eleven rooms, including the Red Cross offices, the parlors and Barton's bedroom. Visitors to Clara Barton National Historic Site can gain a sense of how Barton lived and worked. Guides lead tourists through the three levels, emphasizing Barton's use of her unusual home. Modern visitors can come to appreciate the site in the same way visitors did in Clara Barton's lifetime.