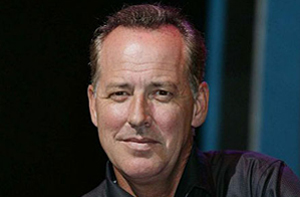 Michael Ciaran Parker (born May 4, 1952) is an English comedian better known by his stage name Michael Barrymore, who appeared as a presenter of game shows and light entertainment programmes on British television in the 1990s.

With his then wife Cheryl as manager, he won a 1979 edition of New Faces, and then became a regular panellist on Blankety Blank and the warm-up man for Larry Grayson on the Generation Game..

Barrymore went on to present ITV1 entertainment show Strike It Lucky from 1986, followed by Kids Say the Funniest Things and My Kind of Music. Barrymore was voted the UK's favourite TV star several times, and became one of the highest-paid stars on TV.

The body of Stuart Lubbock (1 October 1969 - 31 March 2001) was found by the side of the Barrymore's swimming pool. After a police investigation, the Essex CPS stated "I have decided that there is insufficient evidence for a realistic prospect of conviction."

Early career
He spent his early career working as a Redcoat at Butlins holiday camps, and then in the West End theatre shows of London, where he met dancer Cheryl St Claire in 1974.They married in 1976, With Cheryl as manager and the mastermind behind Barrymore's meteoric rise, he firstly won a 1979 edition of New Faces, and then became a regular panelist on Blankety Blank and the warm-up man for Larry Grayson on the Generation Game..From there Barrymore rose to fame presenting ITV1 entertainment show Strike It Lucky from 1986, followed by Kids Say the Funniest Things and My Kind of Music. Barrymore was voted the UK's favourite TV star several times, and became one of the highest-paid stars on TV.

Coming out
At the very top in his career, Barrymore was untouchable. However he soon suffered increasing alcohol problems. Barrymore claims he wanted to seek help, but that Cheryl continually told him: "No, you’re not (alcoholic). Don’t be stupid."

In mid-1995, Barrymore went to a pub The White Swan in London's East End, where he and Karl Nightingale serenaded a startled crowd of muscled young skinheads with the words: "Start spreading the news, I'm gay today". Within 48 hours, every tabloid newspaper had printed its own version of the evening's events, including an untrue claim that the star had thrown away his wedding ring.

After appearing as the headline act on the 1995 Royal Variety Performance, where he sang a version of Will You Still Love Me Tomorrow with the Queen's Guard gun drill, in November 1995, Barrymore attended the National Television Awards, where clearly drunk he made a rambling, incoherent speech. At an after-show party on a live late night radio show, he publicly declared he was gay and "no longer wanted to live a lie", following which he split with Cheryl. Cheryl later claimed that Barrymore took the step and did not tell her because of his talks with Princess Diana.

Divorce
After several aborted reunions, Cheryl and Michael divorced in 1997 and Cheryl went on to publish the autobiography Catch a Falling Star which contained details of their acrimonious split. The couple subsequently had no contact, and Cheryl at her request ceased to be Barrymore's agent or manager.

Barrymore later suggested in his 2006 autobiography Awight Now: Setting the Record Straight that Cheryl was a control freak who controlled his every movement including his clothes, and she had created the character that was "Michael Barrymore", which consequently drove him to alcohol, drugs and gay affairs.

In an interview in 2002, Barrymore admitted that he is an alcoholic.

On 1 April, 2005, Cheryl Barrymore died suddenly at the age of 55 at St John and St Elizabeth Hospital in St John's Wood, having been diagnosed with lung cancer just six weeks earlier. Shortly before her death she asked that details of her condition be kept secret from her former husband, and also left instructions that he should not be invited to attend her funeral.

Death of Stuart Lubbock
This article or section may contain an inappropriate mixture of prose and timeline.
Please help convert this timeline into prose or, if necessary, a list. (February 2008)

Barrymore subsequently received a police caution for possession and use of cannabis, but no other charges were laid against him or anyone else in connection with the death, although two other party-goers, unemployed Justin Merritt and drag queen Jonathan Kenney were arrested on suspicion of murder on 6 June 2001. The inquest that took place in September 2002 reached an open verdict.

In light of the verdict, and the fact that she was approached by a friend of the Lubbock family, Cheryl Barrymore provided the Lubbock family solicitor with both a sworn affidavit and subsequent court testimony that her ex-husband had lied under oath, and could in fact swim. She also alleged the entertainer had rubbed cocaine on to the gums of other people as well as himself.

In November 2002 Barrymore's lawyers successfully demanded that Essex Police re-investigate matters surrounding Lubbock's death. Their focus was on Barrymore's allegations that the injuries inflicted upon Lubbock's body could have occurred while lying unguarded in the mortuary. A pathologist's report found that Lubbock's wounds were only four hours old at the time of the examination at 4pm, while Lubbock had been pronounced dead at the Princess Alexandra Hospital in Harlow at 8.20am that morning.

On Barrymore's high-profile return to the UK in January 2006 to take part in Celebrity Big Brother, Essex lawyer and local activist Anthony Bennett initiated a private prosecution, comprising six charges regarding Barrymore's alleged misuse of drink and drugs on the night of the younger Lubbock's death. The action commenced in Epping Magistrates Court on 16 January 2006.

On 10 February, 2006, a District Judge at Southend Magistrates' Court blocked the private prosecution against Barrymore on the grounds of insufficient evidence being available for the case to continue.

In an interview with Piers Morgan in the December 2006 edition of GQ magazine, Barrymore claimed there were other witnesses to the events who were hiding information.

On 2 December, 2006, police announced they were re-opening the investigation into Stuart Lubbock's death. The re-investigation followed a lengthy dossier submitted by Anthony Bennett, who was now Terry Lubbock's solicitor, cataloguing a series of alleged failures by Essex Police in the original investigation and claiming that there had been an elaborate cover-up of the true circumstances of Lubbock's death.

On 22 December, 2006, following a successful complaint to the Press Complaints Commission by Bennett, The Sun published a letter from Terry Lubbock replying to the newspaper's five-page feature on Barrymore earlier in the year which featured Terry's meeting with Barrymore.

On 14 June, 2007, Essex police arrested Barrymore and two other men on suspicion of murder and serious sexual assault in the Lubbock case. The two other men arrested were Jonathan Kenney, Barrymore's lover and partner at the time of the death, and Justin Merritt, an unemployed former dustman at the time. The three men were held for questioning at South Woodham Ferrers Police Station, Essex. This followed reports in The Harlow Herald that police had seized tapes from the home of Barrymore's literary agent Tony Cowell allegedly containing conversations between Cowell and Barrymore. On 15 June, 2007, police were given permission to question Barrymore and one other man for a further 12 hours. Barrymore's solicitor Henri Brandman also confirmed his client was one of the men arrested.

Later that day Barrymore was released on police bail pending further enquiries. His solicitor stated that Barrymore "categorically denied" the allegations made and had not been charged with any offence.

On 31 July, 2007 it was announced that Barrymore had been re-bailed to appear at an Essex Police Station on 10 September. He answered bail on 10 September at a police station in Harlow, Essex. Police were then granted a further 12 hours to question him. On that date, Barrymore was told that he would not face charges for the events that occurred.


Career revival
Following the revelations of Lubbock's death, ITV terminated his contract and his UK TV career subsequently collapsed. A new series of Kids Say the Funniest Things recorded prior to the scandal was pulled from the ITV schedule and never broadcast. It has also been reported that the BBC cancelled publication of Barrymore's life story.

In September 2003, Barrymore staged a one-man show at London's Wyndham's Theatre, which closed after a few days due to scathing critical notices. He subsequently emigrated to New Zealand to live with his partner, Shaun Davis. He has since had live stage shows in New Zealand and Australia. In 2005, he appeared in the stage musical, Chicago, in Napier, New Zealand.

Celebrity Big Brother
In December 2005, it was announced that Barrymore was being paid £150,000 by Channel 4 to take part in the British version of Celebrity Big Brother commencing 5 January 2006. On his entry into the house, Barrymore received a generally positive reception from the crowd which brought him to tears.

Barrymore initially showed signs of strain in the Big Brother house, particularly during the first few days. His time in the house will particularly be remembered for his visibly strong dislike of model Jodie Marsh, and his difficult relationship with housemate George Galloway, which culminated in a 20 minute slanging match between the two men that became one of the defining moments of the series. The public clearly took to Barrymore, and on 27 January 2006 he finished runner-up to fake celebrity Chantelle Houghton. Barrymore was visibly moved by the public support he had received when interviewed by Davina McCall after the show.

After Big Brother
Remaining in the UK, Barrymore was booked to be the guest host on Channel 4's The Friday Night Project for the edition broadcast on 3 February 2006.

It was announced that for Christmas 2006, Barrymore would play the title role in Bill Kenwright's new production of Scrooge - The Musical" Barrymore performed the lead role at the Empire Theatre, Sunderland, but the production's scheduled transfer to the West End was cancelled.

After Barrymore had completed his role in Scrooge - The Musical, he returned to New Zealand with Shaun Davis, his on-and-off partner since 1997. The relationship soon turned sour however, and by March 2007, the pair had split.

In January 2008, Barrymore took the role of comedian and writer Spike Milligan in the stage play 'Surviving Spike'.

In June 2008, The Sun newspaper ran a story claiming that Barrymore had been on a heavy drinking session by himself. The Sun printed pictures that appear to show Barrymore heavily intoxicated.