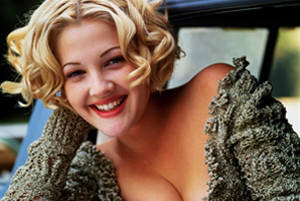 Drew Blyth Barrymore (born February 22, 1975) is an American actress and film producer, the youngest member of the Barrymore family of American actors. She has her own production company, Flower Films. Barrymore made her screen début in Altered States (1980); she made her breakout role two years later in E.T. the Extra-Terrestrial. She quickly became one of Hollywood's most recognized child actresses.

In the late-1980s and early-1990s, Barrymore had various problems with alcohol and drugs, which somewhat damaged her career. She also posed nude for Playboy in 1995. She made a comeback with the thriller Poison Ivy (1992), and afterwards began to perform predominantly in leading roles in a variety of films, ranging from big budget romantic comedies and dramas to science fiction, horror films, and action thrillers. Barrymore has a worldwide box office gross that stands at over $2.3 billion. According The Hollywood Reporter's annual Star Salary Top 10, she is one of the actresses with the second highest salary per movie for 2006.

Barrymore was born into the acting profession, coming from a long line of acting talent stretching back nearly 200 years; her great-great grandparents John Drew, Louisa Lane Drew, her great-grandparents Maurice Barrymore, Georgiana Drew and Maurice Costello, and her grandparents John Barrymore and Dolores Costello were all highly successful actors; John Barrymore was arguably the most acclaimed actor of his generation. She is the grand-niece of Lionel Barrymore, Ethel Barrymore, and Helene Costello, and the great grandniece of John Drew, Jr., actress Louisa Drew, and silent film actor/writer/director Sidney Drew. Her father and half-brother are also actors. She is also the goddaughter of director Steven Spielberg.

Her first name, Drew, was the maiden name of her paternal great-grandmother, Georgiana Drew; her middle name, Blyth, was the original surname of the dynasty founded by her great-grandfather, Maurice Barrymore.

Early work
Barrymore's career began when she was 11 months old, when she auditioned for a dog food commercial. When she was bitten by her canine co-star, the producers feared she'd cry, but she merely laughed, and was hired for the job. She made her film debut in Altered States (1980). A year later, she landed the role of Gertie in E.T. the Extra-Terrestrial, which made her famous.

She received a Golden Globe nomination for Best Supporting Actress in 1984 for her role in Irreconcilable Differences. In the wake of this sudden stardom, she endured a notoriously troubled childhood, already a regular at the famed Studio 54 when she was a little girl, smoking cigarettes and drinking alcohol by the time she was 9, smoking marijuana at 10, and snorting cocaine at 12. Barrymore later described this period of her life in her 1990 autobiography, Little Girl Lost. Her nightlife and constant partying became a popular subject with the media.

Though she overcame her substance abuse problems by the time she entered adulthood, she maintained her "bad girl" image, and used her new-found role as a sex symbol to stage a career comeback playing a manipulative, evil teenage seductress in Poison Ivy (1992). The film found enormous success on VHS when it was first released.

She posed nude for the January, 1995 issue of Playboy. Spielberg gave her a quilt for her 20th birthday with a note that read "Cover yourself up". Enclosed were copies of her Playboy pictures, with the pictures altered by his art department so that she appeared fully clothed. At that time she had also appeared nude in her last five movies. During a 1995 appearance on The Late Show with David Letterman, Barrymore climbed onto Dave Letterman's desk and bared her breasts to him, her back to the camera. The flash was intended to celebrate his birthday. She also modeled in a series of Guess? jeans ads during this time.

She made a comeback in the successful 1996 horror film Scream.

1996-present: continued fame
Barrymore has continued to be highly bankable, and a top box office draw. She has been especially adept in romantic comedies, such as Wishful Thinking (1996), The Wedding Singer (1998), Home Fries (1998), Never Been Kissed (1999), 50 First Dates (2004), and Fever Pitch (2005). Summing up Drew's appeal, Roger Ebert, in his review of 50 First Dates describes Barrymore as having a "smiling, coy sincerity", describing the film as "ingratiating and lovable". She has also produced several films, including Charlie's Angels (2000), a major box office success of 2000. After Charlie's Angels, Drew had a dramatic role in the comedy/drama Riding in Cars with Boys (2001), where she played a teenage mother in a failed marriage with the drug-addicted father (based on the real-life story of Beverly D'Onofrio). In Richard Kelly's debut movie Donnie Darko she had the fairly small role of Karen Pomeroy, the title character's English teacher. In 2003, she reprised her role as Dylan Sanders in Charlie's Angels: Full Throttle. Maxim magazine featured Barrymore and her fellow Angels in their "Girls of Maxim" gallery after the launch of the film. Later in 2002, Barrymore appeared in Confessions of a Dangerous Mind, alongside Julia Roberts. In the words of Yahoo! Movies:

Heir to a Hollywood dynasty, child star, prepubescent drug and alcohol abuser, teenage sexpot, and resurrected vessel of celluloid purity, Drew Barrymore is nothing if not the embodiment of the rise and fall of Hollywood fortunes, self-reinvention, and the healing powers of good PR.
She was the subject of My Date with Drew (2005). In it, an aspiring filmmaker and fan uses his limited resources in an attempt to gain a date with her.

Barrymore, Josette Sheeran Shiner and Paul Tergat meet with Condoleezza RiceOn February 3, 2004, she received a star on the Hollywood Walk of Fame. One of her most recent roles has involved her becoming a recurring character in the hit animated comedy Family Guy as Brian Griffin's shallow girlfriend, Jillian. She has since appeared in four episodes.

Barrymore has also appeared in the films Lucky You (2007), and Music and Lyrics (2007). She recently hosted Saturday Night Live for the fifth time, making her the second female host in the show's history to do so (Candice Bergen being the first) and still remains the youngest celebrity to host the show (Barrymore hosted in 1982 at age 7; Jodie Foster was 14 when she hosted it in 1976). In March 2007, Barrymore became the face of Gold by Giles Deacon collection for the fashion chain New Look. British Designer of the Year said Drew Barrymore was his number one choice to front his creations. “She’s highly intelligent, a great businesswoman, and a role model, but she’s also someone that’s made mistakes in the past and come through and I think people respond to and respect that,” he said.

It was announced on April 11, 2007 that Barrymore will become CoverGirl Cosmetic's newest model and spokeswoman.

In April 2007, Barrymore reached No. 1 in People's annual 100 Most Beautiful People list, taking the title from Angelina Jolie.

In May 2007 Drew Barrymore was named Ambassador Against Hunger for the United Nations World Food Programme .