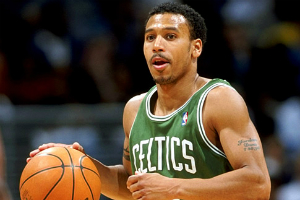 Dana Bruce Barros (born April 13, 1967) is a retired American professional basketball player from the NBA. In college, he played at Boston College, finishing as one of the school's all-time leading scorers.

The 5' 11" (1.80 m), 165 lb (75 kg) point guard, who attended Xaverian Brothers High School in Westwood, Massachusetts, began his professional career in 1989 when he was selected in the first round of the NBA Draft by the Seattle SuperSonics with the 16th pick. Most of his time spent in Seattle was as a backup to point guard Gary Payton, who was considered to be a much more competent ball handler and defender, as Barros was deemed more usable at shooting guard.

Prior to the 1993-94 season, the Sonics traded Barros to the Charlotte Hornets in exchange for Kendall Gill. Two days later, Charlotte traded Barros, Sidney Green, and their 1993 draft choice, Greg Graham, to the Philadelphia 76ers for Hersey Hawkins.

In Philadelphia, Barros received much more playing time (31 minutes per game) with the Sixers, than when he was with the Western Conference SuperSonics (18 minutes per game). This allowed him to improve his scoring output the previous season with Seattle from 7.8 to 13.3 points per game.

In Barros' second season with the Sixers (1994-95) he achieved career highs in minutes per game (40.5), field goal percentage (49.0%), three-point percentage (46.4%), scoring average (20.6 points per contest), rebounding (3.3 per game) and assists (7.5) while playing all 82 regular season games. Highlights included a 50-point, 8-rebound performance against the Houston Rockets in March 1995, and a 25-point, 10-rebound, 15-assist triple-double effort against the Orlando Magic a few weeks later. Barros was selected to play in the 1995 NBA All-Star Game and at season's end was voted the league's Most Improved Player. He also set an NBA record by making at least one three-pointer in 89 consecutive games from December 23, 1994 until January 10, 1996. He appeared four consecutive times at the AT&T Long Distance Shootout during the All-Star Weekend from 1992 to 1996, coming in second twice.

Barros became a free agent at the end of the 1995-96 season. He signed with his hometown Boston Celtics, and remained for five seasons as a role player alongside David Wesley and Dee Brown and mentor to younger players such as Antoine Walker and Paul Pierce.

In the offseason of 2000, Barros was traded to the Dallas Mavericks as part of a four-team deal that also involved the Utah Jazz and Golden State Warriors. By the time the 2000-01 season had commenced, the Mavs had traded Barros to the Detroit Pistons, where he played 89 games over two seasons, averaging 7.5 points per game, until waiving him in 2002.

After that, he was out of the NBA for almost two years, before rejoining the Celtics towards the end of the 2003-04 regular season, first as an assistant coach and later as a player. He scored six points in one final game. He retired from the league with career averages of 10.5 points, 1.9 rebounds, 3.3 assists and a career three-point average of 41.1%.

After retiring from basketball, Barros opened the Dana Barros Sports Complex, a sports and social club in Mansfield, Massachusetts. However, the project proved more costly than Barros expected. He incurred massive debts, and eventually left the business in 2006.

For two months in 2006, Barros worked as an assistant coach for the Northeastern University men's basketball team, a position from which he resigned in June 2006 to accept a role as the Director of Recreation for the city of Boston.

Barros is now with the media relations department for the Celtics.

Barros serves as a "basketball insider" for New England Sports Network (NESN) and offers analysis and insight on the NBA on the show NESN Daily.