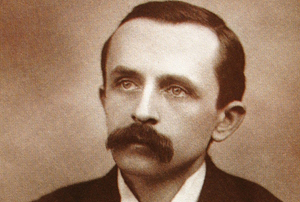 Sir James Matthew Barrie, 1st Baronet, OM (9 May 1860 – 19 June 1937), more commonly known as J. M. Barrie, was a Scottish novelist and dramatist. He is best remembered for creating Peter Pan, the boy who refused to grow up, whom he based on his friends, the Llewelyn Davies boys.

He is also credited with the popularisation of the name "Wendy", which was little-known in either Britain or America before he gave it to the heroine of Peter Pan. He was made a baronet in 1913; his baronetcy was not inherited.

Barrie was born to a family of Scottish weavers in Kirriemuir, Angus, the ninth child of ten. When he was six, his brother David, his mother's favourite, died in a skating accident on the eve of his 14th birthday. His mother never recovered from the loss, and ignored the young Barrie. One time he entered her room, and heard her say "Is that you?" "I thought it was the dead boy she was speaking to," wrote Barrie in his biographical account of his mother, Margaret Ogilvy (1896), "and I said in a little lonely voice, 'No, it's no' him, it's just me.'"

Barrie's mother found comfort in the fact that her dead son would remain a boy forever, never to grow up and leave her. This had a profound impact on Barrie: he never grew much beyond five foot, and some authors have speculated that Peter Pan was inspired by the traumatic events of his own childhood. At the age of 13, Barrie was sent away to boarding school at Dumfries Academy. Here he and his friends spent time in the garden of Moat Brae house, playing pirates "in a sort of Odyssey that was long afterwards to become the play of Peter Pan".

Barrie was educated at the Glasgow Academy, Forfar Academy and Dumfries Academy, and the University of Edinburgh.

Barrie became a journalist in Nottingham, then London, and turned to writing novels and subsequently plays. He set his first novels in his birthplace of Kirriemuir, which he referred to as "Thrums". Barrie often wrote dialogue in Scots. His Thrums novels were hugely successful: Auld Licht Idylls (1888), A Window in Thrums (1889), and The Little Minister (1891). His two "Tommy" novels, Sentimental Tommy (1896) and Tommy and Grizel (1902), dealt with themes much more explicitly related to those that would appear in Peter Pan. The first appearance of Peter came in The Little White Bird (1901).

Barrie also wrote a number of works for the theatre, beginning with Ibsen's Ghost (1891), a parody of Henrik Ibsen's drama Ghosts, which had just been performed for the first time in England under the Independent Theatre Society, led by J. T. Grein. Barrie's play was first performed on May 31 at Toole's Theatre in London. Barrie seemed to appreciate Ibsen's merits; even William Archer, the translator of Ibsen's works into English, enjoyed the humour of the play and recommended it to others. Barrie also authored the flop, Jane Annie (1893), which he begged his friend Arthur Conan Doyle to revise and finish, when he suffered the first of his many nervous breakdowns. Notable successes included Quality Street (1901) and The Admirable Crichton (1902).

Barrie's most famous and enduring work, Peter Pan, had its first stage performance on December 27, 1904. In 1929 he specified that the copyright of the play should go to the nation's leading children's hospital, Great Ormond Street Hospital in London. The current status of the copyright is complex. Later plays included What Every Woman Knows (1908). His final play was The Boy David (1936), which dramatized the Biblical story of King Saul and the young David. Like the role of Peter Pan, that of David was played by a woman, Elisabeth Bergner.

Barrie, along with a number of other playwrights, was involved in the 1909 and 1911 attempts to challenge the censorship of the theatre by the Lord Chamberlain.

Acquaintances
Barrie traveled in high literary circles, and had many famous friends. With Arthur Conan Doyle he wrote a failed musical. With Robert Louis Stevenson he conducted a long correspondence, but the two never met in person. George Bernard Shaw was for several years his neighbor, and once participated in a Western that Barrie scripted and filmed. Jerome K. Jerome introduced Barrie to his wife; H. G. Wells was a friend of many years. J.M. Barrie met Thomas Hardy through Hugh Clifford while he was staying in London. Conan Doyle, Jerome, Wells and other luminaries such as G. K. Chesterton and A. A. Milne also occasionally played cricket with a team founded by Barrie for his friends, the "Allahakbarries" (the name was chosen under the mistaken belief that "Allah akbar" means "God save us" in Arabic; in fact it means "God is great").

Barrie also befriended Antarctic explorer Robert Falcon Scott and was one of the seven recipients of letters that Scott wrote in the final hours of his life. He was godfather to Robert's son, Peter. Another close friend of Barrie's, theater producer Charles Frohman, who was responsible for the debut of Peter Pan' in both England and the U.S., died famously, declining a lifeboat seat when the RMS Lusitania was sunk by a German U-boat in the North Atlantic. Frohman reportedly paraphrased Peter Pan's final line from the stage play, "To die will be an awfully big adventure."

On several occasions he met and told stories to the little girl who would become Queen Elizabeth II and her younger sister Princess Margaret.

Barrie became acquainted with the family in 1897 or 1898 after meeting George and Jack with their nurse (i.e. nanny) Mary Hodgson in London's Kensington Gardens. He lived nearby and often walked his dog Porthos in the park. He did not meet Sylvia until a chance encounter at a dinner party brought them into social contact. He became a regular visitor at the Davies household and a common companion to the woman and her boys, despite the fact that he and she were each married. Barrie's marriage to the actress Mary Ansell was reportedly a sexless one, and childless; she had an affair with another man and it ended in divorce, highly unusual and stigmatised in those times.

When Arthur Llewelyn Davies died, "Uncle Jim" became even more involved in the boys' lives, and provided financial support to the family. (His income from Peter Pan and other works was easily adequate to provide for them.) Following Sylvia's death a few years later, Barrie claimed that they had been engaged to be married. Her will indicated nothing to that effect, but specified her wish to have Barrie be trustee and guardian to the boys, along with her mother, her brother Guy Du Maurier, and Arthur Llewelyn Davies' brother Compton. When copying the will informally for Sylvia's family, Barrie inserted himself in an additional paragraph: Sylvia had written that she would like Mary Hodgson, the boys' nurse, to continue taking care of them, and that perhaps "Jenny" (Mary's sister) could come help; Barrie wrote "Jimmy" (Sylvia's nickname for him) instead of "Jenny". Although Barrie and Hodgson did not get along well, they served as surrogate parents until the boys were all in school and Jack was married. (Birkin, p. 194)

Although there has always been suspicion about Barrie's friendship with children (the Davies boys especially), there is no evidence that anything inappropriate happened, and Nico, the youngest of the brothers, flatly denied that Barrie ever behaved inappropriately. (Birkin, p. 130)

The statue of Peter Pan in Kensington Gardens, erected in secret overnight for May Morning in 1912, was supposed to be modeled upon photographs of Michael dressed as Peter Pan. However, the sculptor decided to use a different child as a model, leaving Barrie very disappointed with the result. "It doesn't show the devil in Peter", he said. (Birkin, p. 202)

Barrie suffered bereavements with the boys, losing the two to whom he was closest. George was killed in action (1915) in World War I. Michael, with whom Barrie corresponded daily, drowned (1921) at a known danger-spot at Oxford, one month short of his 21st birthday. It was speculated that the drowning was a possible suicide pact with his friend and possible lover Rupert Erroll Victor Buxton. Some years after Barrie's death, Peter Davies, later a publisher, wrote his Morgue, which contains much family information and comments on Barrie.

Works
Barrie's most famous and best loved work is undoubtedly his play Peter Pan, or the Boy Who Wouldn't Grow Up, performed innumerable times since 1904, adapted by Barrie into a novel, and adapted into three feature films. The story is the classic tale of the child that does not want to grow up and Barrie clearly felt that it was, in part, the condition of humanity to feel always in exile from the innocence and freedoms of childhood. The societal constraints of middle-class domestic reality are enacted in the Bloomsbury scenes while the Never-Land is a world free of these Victorian social constraints, a world in which sexuality and morality are crucially ambivalent.

From this point of view, the familial nucleus represented by the Darling Children acts as a metaphor for social order and stability while Peter and the Lost Boys exist without parental (and by implication societal) control. The brutish pirate scenes, in which the Darling Boys indulge with relish (although Peter himself also indulges, and is both infantile and devilish) are the embodiment of anarchic disorder and in this way represent the innate, but repressed, desire for social deviance. Similarly, Wendy can be regarded as the epitome of ‘the good wife and mother’, a role which is playfully challenged by the more flirtatious and untamed Tinker Bell in the parallel dimension of Never Land. George Bernard Shaw’s description of the play as ‘ostensibly a holiday entertainment for children but really a play for grown-up people’, suggests his understanding of the deeper social allegories at work in Peter Pan.

Perhaps the best known, though by no means the finest, of Barrie’s fictional output are his early Thrums stories, Auld Licht Idylls (1888), A Window in Thrums (1889) and The Little Minister (1891). Literary criticism of these works has been unfavourable, tending to disparage these early writings as sentimental and nostalgic depictions of a parochial Scotland far from the realities of the industrialised nineteenth century. Criticism has perhaps judged these early works too harshly. For one thing, regionalism was in fashion at the turn of the century, as exemplified in the fiction of Thomas Hardy and George Elliot. Moreover, Barrie’s descriptions of humble life are acutely observed and the painstaking detail he devotes to describing the conditions in which the rural poor lived offsets some of the more idealised and romantic characterisations and plots. The Thrums tales do not ignore the problems of alcoholism and temptations of adultery in lives characterised by boredom, monotony and poverty.

Works include the play "Dear Brutus".

Death
Barrie lies buried at Kirriemuir next to his parents and one sister and brother.

The BBC made an award-winning miniseries by Andrew Birkin, The Lost Boys (also titled J.M. Barrie and the Lost Boys), in 1978, starring Ian Holm as Barrie and Ann Bell as Sylvia. It is considered factual, includes Arthur Llewelyn Davies (Tim Piggot-Smith), and confronts the issue of Barrie's affection for the Davies boys. The DVD is available in both the UK and USA.

A semi-fictional movie about his relationship with the family, Finding Neverland, was released in November 2004, starring Johnny Depp as Barrie and Kate Winslet as Sylvia Llewelyn Davies. It omits Arthur and Nico.