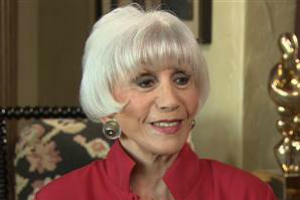 As a teenager, Barrett overcame a degenerative hip condition that made walking extremely difficult, and organized fan clubs for popular singers she admired, such as Eddie Fisher and Steve Lawrence. She became a gossip columnist for the Bell-McClure newspaper syndicate in 1957, and soon went to work for the management handling teen idols Frankie Avalon and Fabian.

In 1966, she began broadcasting Hollywood gossip on the Los Angeles television station KABC-TV. She appeared on TV regularly, going on to appear on ABC's five owned and operated stations around the country. However, not everyone was thrilled with the arrangement. WABC-TV in New York put her pre-recorded gossip segment into its nightly local news, but anchor Roger Grimsby would generally introduce it by making disparaging comments about her. Barrett made the enemies list of Frank Sinatra by criticizing his personal life, particularly his relationships with his children.

She developed the first in-depth personal TV specials about film, television, music, sports and political celebrities, and had a series of magazines on the entertainment industry that were top-rated at newsstands, including Rona Barrett's Hollywood, published by Laufer, edited by Bill Royce and Judy Wieder. As such she paved the way for Barbara Walters and many entertainment reporters.

In 1972, her novel titled The Lovo-maniacs was published. Her autobiography, Miss Rona, was published in 1974. It began: "Just an inch, Miss Rona, just let me put it in an inch!" as an unnamed famous actor pleaded to be allowed to experience a modicum of sexual intercourse with her (some have speculated that it is actor Hugh O'Brian, but she denies he is the actor in question). In the book she also acknowledged having a nose job, while discussing details of her teenage fan club involvements and her work with Frankie Avalon's management. She wrote another book, How You Can Look Rich and Achieve Sexual Ecstasy (1978).

Barrett began appearing on Good Morning America in 1975. She was signed in 1980 to co-host NBC's Tomorrow with Tom Snyder, but a very public feud with Snyder resulted in her leaving the show the following year. In 1986, she bought a ranch at Santa Ynez, California, and began commuting back and forth to Los Angeles. In 1990, she made a guest appearance as an interviewer at WWF's WrestleMania VI at Skydome in Toronto, Ontario, Canada. In 1991, she retired full-time to her ranch.

In 2009, a Golden Palm Star on the Palm Springs, California, Walk of Stars was dedicated to her.

Barrett found marketing lavender flowers was not simple and decided to duplicate Paul Newman's methods from Newman's Own products. She founded the Rona Barrett Lavender Company, in Santa Ynez, near Santa Barbara, in the Central Coast region of California, as a small producer of lavender bath, beauty, food and aromatherapy products. The company follows a model of using celebrity-branded consumer goods to generate funds and raise awareness of a non-profit cause. A portion of all company proceeds were donated to the Rona Barrett Foundation. According to the foundation's website, they have ceased selling lavender products and the company was sold.

Barrett started The Rona Barrett Foundation, a non-profit organization dedicated to the aid and support of senior citizens in need that was supported by a 2% portion of the profits from her lavender business until it ceased production. The foundation now only takes direct donations and is working on building a village called "the Golden Inn and Cottages" for seniors in need of proper housing and care facilities. At present it is a pilot program that is still under development.