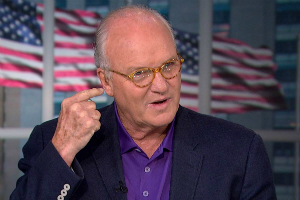 Michael "Mike" Barnicle (born October 13, 1948) is an American print and broadcast journalist as well as a social and political commentator. He is a frequent contributor and occasional guest host on MSNBC's Morning Joe and Hardball with Chris Matthews, and is also seen on NBC's Today Show with news/feature segments. He has been a regular contributor to the local television news magazine, "Chronicle" on WCVB-TV, since 1986. Barnicle has also appeared on the PBS NewsHour, CBS's 60 Minutes, ESPN, and HBO sports programming.

The Massachusetts native has written more than 4,000 columns collectively for the New York Daily News (1999–2005), Boston Herald (2004–2005 and occasionally contributing from 2006-2010), and The Boston Globe, where he rose to prominence with columns about Boston's working and middle classes. He also has written articles and commentary for Time magazine, Newsweek, The Huffington Post, The Daily Beast, ESPN Magazine, and Esquire, among others.

Barnicle was born in Worcester, Massachusetts, grew up in Fitchburg, Massachusetts and graduated from Boston University in 1965. Barnicle appeared in a small part in the Robert Redford film The Candidate. While visiting Redford's "Sundance" home in Utah, Barnicle was asked to write a column in the Boston Globe, and his column ran for 24 years between 1973 and 1998.

The paper and its columnist won praise with their coverage of the political and social upheaval that roiled Boston after the city instituted a mandatory, court-ordered school desegregation plan in the mid 1970s. In his Pulitzer Prize-winning book Common Ground: A Turbulent Decade in the Lives of Three American Families (1986), J. Anthony Lukas wrote that Barnicle gave voice to the Boston residents who had been angered by the policy. Lukas singled out Barnicle's column ("Busing Puts Burden on Working Class, Black and White" published in The Boston Globe, October 15, 1974) and interview with Harvard psychiatrist and author Robert Coles as one of the defining moments in the coverage. The paper earned the 1975 Pulitzer Prize for public service.

Over the next three decades, Barnicle became a prominent voice in New England. His columns mixed pointed criticism of government and bureaucratic failure with personal stories that exemplified people's everyday struggles to make a living and raise a family. Tapping into a rich knowledge of local and national politics, Barnicle had unique takes on the ups and downs of luminaries such as Sen. Ted Kennedy, Sen. John Kerry, and longtime Congressional Speaker of the House Thomas Tip O'Neill as well as Boston mayors Kevin White, Ray Flynn, and Tom Menino. In subsequent years, Barnicle's coverage expanded as he reported from Northern Ireland on the conflict and resolution there to the beaches of Normandy, from where he wrote about the commemorations of World War II veterans.

Barnicle has won local and national awards for both his print and broadcast work over the last three decades, including from the Associated Press, United Press International, National Headliners, and duPont-Columbia University. He holds honorary degrees from the University of Massachusetts Amherst and Colby College.

In 1998, Barnicle resigned from the Boston Globe amid a controversy over two columns, written three years apart. The first column of more than 80 lines of humorous observations, had a few lines that bore similarity to jokes in the 1997 book Brain Droppings by George Carlin. In a subsequent Globe review of all of Barnicle's many years of work, a second column was called into question. The October 8, 1995 column recounted the story of two sets of parents with cancer-stricken children. When one of the children died, the parents of the other child, who had begun to recover, sent the dead child's parents a check for $10,000. When the Globe could not locate the people who had not been publicly identified, Barnicle insisted nonetheless that the story was true. He said he did not obtain the story from the parents but from a nurse, whom he declined to identify. Mrs. Patricia Shairs later contacted the Globe to indicate that the story Barnicle wrote was about her family, although she said some of the facts were incorrect.

Six months later, the New York Daily News recruited Barnicle to write for them, and later the Boston Herald . Barnicle told reporters that he had nothing but "fond feelings for 25 years at the Globe." Barnicle hosted a radio show three times a week called Barnicle's View.

Barnicle has since become a staple on MSNBC, including on Morning Joe and Hardball with Chris Matthews as well as on specials on breaking news topics.