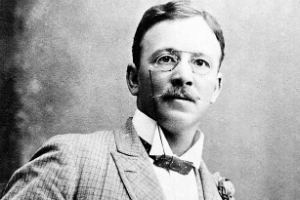 Barney Barnato (21 February 1851 – 14 June 1897), born Barnet Isaacs, was a British Randlord, one of the entrepreneurs who gained control of diamond mining, and later gold mining, in South Africa from the 1870s.

Barney Barnato claimed he had the same birthday as Cecil Rhodes (5 July 1853). Most biographies give his date of birth as 5 July 1852. However, his birth certificate (supported by census data) shows he was born Barnet Isaacs in the City of London on 21 February 1851, the son of Isaac and Leah Isaacs. He was educated by Moses Angel at the Jews' Free School. He had a hard life, and is reputed to have begged pass-outs from theatre-leavers at the Garrick Theatre in Leman Street, to sell them on to others for a halfpenny. For a while he became a prizefighter and music-hall turn.

Isaacs joined his brother Harry in the Cape Colony in 1873 during the "diamond rush" which accompanied the discovery of diamonds at Kimberley. His brother had gone out in 1871 and had been working as a comedian and conjurer, and his younger brother wanted to join in, calling out, "And Barnett, too!" The oft-repeated phrase evolved, to the point which Isaacs changed his name to Barney Barnato. He was married to Leah (daughter of Solomon) Harris.

Barney Barnato entered business as a dealer in cigars which were in short supply in the diamond district. He used this to establish a wider business buying other supplies for the miners and brokering diamonds to buyers in Capetown. From there the brothers started buying worked over claims and mining for smaller stones than previous operators. They then used profits to buy larger more successful mines.

Barnato Diamond Mining competed with Cecil Rhodes in aggressively buying out competitors to gain market share in the Cape Colony diamond mining industry. The rivalry ended when Rhodes purchased the Barnatos' firm for GB£4.0 million (equivalent to £2.03 billion in 2013); this transaction was a key step in the formation of De Beers Consolidated Mines, the international diamond mining conglomerate. The purchase cheque, signed by Rhodes, is said to have been the largest such instrument ever presented for payment up to that time. Barnato subsequently became Kimberley's member of parliament in the Cape Parliament from 1889 until his death.

Barnato doubled his fortune in the boom in South African gold mining shares of 1894–95 before losing most of it in the 1896 share collapse. He built, but never lived in, a vast house on the corner of Park Lane and Stanhope Gate in Mayfair, London, which was bought after his death by the banker Sir Edward Sassoon.

Barnato died in 1897 in mysterious circumstances; records state that he was lost overboard near the island of Madeira, whilst on a passage home to England. Although some have wondered if this were suicide and suggested that the Jameson Raid had had a major impact on him and left him severely depressed, his family vigorously rejected that theory, saying that it was totally out of character for a man who had been a pioneer in the rough-and-ready days of emerging Southern Africa. His body was recovered from the sea and is buried at Willesden Jewish Cemetery, London.

The theory regarding the suicide of Barnato has also been tied to sinister later events. One of his heirs, Woolf Joel was shot and killed in his business offices in Johannesburg by a con-man named Karl Frederick Kurtze who went away with the name of Ludwig von Veltheim in 1898. In the trial for murder, von Veltheim hinted that he was supposed to be orchestrating a plot to kidnap Paul Kruger, President of the Transvaal Boer Republic, that Barnato and Joel were backing. The murder stemmed from blackmail against Joel, but von Veltheim claimed he was only seeking his promised payment. As a result von Veltheim was able to get an acquittal from a Boer Jury (possibly due to anti-British and anti-Semitic feelings towards the deceased). It was suggested by Brian Roberts, in his book The Diamond Magnates, that Barnato may have been approached by von Veltheim too, and unsettled by his physical threats and the possibility of exposure.

His will divided up his considerable fortune between his family, amongst which was his sister Sarah and her husband Abraham Rantzen, great-grandparents of TV presenter Esther Rantzen. Another beneficiary was his son, Woolf Barnato, who used part of the multi-million pound fortune he inherited at the age of two, to become a pioneer racing driver in the 1920s, one of the so-called Bentley Boys.

Woolf Barnato's daughter Diana Barnato Walker died in 2008 at the age of 90. She was the first British woman to break the sound barrier.