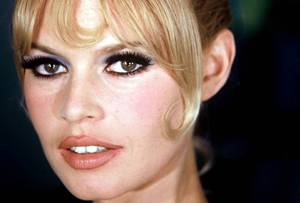 In the 1970s after her retirement from the entertainment industry, Bardot established herself as an animal rights activist, which she continues today. During the 1990s she was outspoken about her political views on such issues as immigration, Islam in France, miscegenation, and homosexuality.

Bardot born in Paris to Anne-Marie "Toty" Mucel and Charles "Pilou" Bardot, an industrialist. Both parents were fervently religious and conservative, instilling in Brigitte their Roman Catholic ideals.

At an early age her mother encouraged her interest in music and dance; she had modeled for popular magazine Elle by the time she was 15 years old.

In 1952, she appeared on screen for the first time in Le Trou Normand. That same year, at age 18, she married director Roger Vadim, with whom she had been romantically involved for several years. At one point she attempted suicide when her parents refused allowing her to marry Vadim. They married when she turned 18, and divorced five years later.

Although the European film industry was then in its ascendancy, her personal rise was remarkable; she has been one of the few European actresses to receive mass media attention in the United States. She and Marilyn Monroe, who was, like her, not real blond, but darkhaired and bleached, were the icons of female sexuality in the 1950s and 1960s, and whenever she made public appearances in the United States the media hordes covered her every move.

Her films of the early and mid 1950s were lightweight romantic dramas, some of them historical, in which she was cast as ingénue or siren, often with an element of undress. She played bit parts in three English-language films, the British comedy Doctor at Sea (1955), Helen of Troy (1954), in which she was understudy for the title role but only appears as Helen's handmaid, and Act of Love (1954) with Kirk Douglas. Her French-language films were dubbed for international release. "She is every man's idea of the girl he'd like to meet in Paris," said the film-critic Ivon Addams in 1955.

Vadim was not content with this light fare. The New Wave of French and Italian art directors and their stars were riding high internationally, and he felt Bardot was being undersold. Looking for something more like an art film to push her as a serious actress, he showcased her in And God Created Woman (1956) with Jean-Louis Trintignant. The film, about an amoral teenager in a respectable small-town setting, was a big international success. She may have had an affair with her co-star Trintignant, but this was more likely a pre-release publicity gimmick. The film is often wrongly described as her first film (it was her seventeenth) and to have launched her overnight, but it did help move her towards the cinematic mainstream.

However, it also ruled out a transition to Hollywood, where she was thought too risqué to handle. The Doris Day era was still in full swing, and even Jane Russell in The French Line (1953) had been thought to be going too far by showing her midriff. Erotica like Bardot's Cette sacrée gamine (That Crazy Kid, 1955) was considered acceptable at the box office so long as it was clearly labelled "European." Bardot's limited English and strong accent, while beguiling to the ears of men, did not suit rapid-fire Hollywood scripts. In any event, staying in Europe benefited her image when the 1960s began to swing and Hollywood slipped into the background for a while, and Bardot was voted honorary sex-goddess of the decade.

She divorced Vadim in 1957, and married actor Jacques Charrier in 1959, by whom in 1960 she had her only child, Nicolas-Jacques Charrier. She and her son are currently estranged; She once referred to him as "a tumour". Her marriage was preyed on by the paparazzi, and there were clashes over the direction of Bardot's career. Her films became more substantial, but this brought a heavy pressure of dual celebrity as she sought critical acclaim while remaining to most of the world a glamour model.

Poster for Bardot's film Le Mépris (Contempt).Vie privée (1960), directed by Louis Malle has more than an element of autobiography in it. The scene in which, returning to her flat, Bardot's character is harangued in the lift by a middle-aged cleaning-lady calling her a tramp and a tart was based on an actual incident, and is a resonant image of celebrity in the mid-20th century.

Soon after, Bardot withdrew to the seclusion of Southern France and is now known to have attempted suicide on numerous occasions:

"I really wanted to die at certain periods in my life. Death was like love, a romantic escape. I took pills because I didn't want to throw myself off my balcony and know people would photograph me lying dead below."

On her 26th birthday she attempted her most publicly known suicide attempt, swallowing a bottle of sleeping pills and slitting her wrists.

Throughout the 1960s, she appeared in glossy star-vehicles like Viva Maria (1969), dabbled in pop music, and played the role of glamour model and icon. She starred in Jean-Luc Godard's film Contempt (1963). In 1965 she appeared as herself in the Hollywood production Dear Brigitte (1965) starring Jimmy Stewart.

Her other husbands were German millionaire playboy Gunter Sachs (1966-1969), and Bernard d'Ormale (1992-present). She has also had reputed relationships with many men, including singers Serge Gainsbourg and Sacha Distel. In the late 1950s, she shared an exchange she considered "croiser de deux sillages" with actor and true crime author John Gilmore, then an actor in France for a New Wave film with Jean Seberg. Gilmore told Paris Match, "I felt a beautiful warmth with Bardot but found it difficult to discuss things to any depth whatsoever."

She is recognised for popularising bikini swimwear in early films such as Manina (Woman without a Veil, 1952) and in her appearances at Cannes and in many photo shoots. She even sported an early version of the monokini from time to time. Though this was not considered extraordinary in France, it was considered nearly scandalous in the US. The fashions of the 1960s looked effortlessly right and spontaneous on her, and she joined Marilyn Monroe and Jackie Kennedy in becoming a subject for Andy Warhol paintings.

In 1970, the sculptor Alain Gourdon used Bardot as the model for a bust of Marianne, the French national emblem.

Activism
In 1973, just before her fortieth birthday, Bardot announced her retirement. After appearing in more than fifty motion pictures, and recording several music albums, most notably with Serge Gainsbourg, she chose to use her fame to promote animal rights.

In 1986, she established the Brigitte Bardot Foundation for the Welfare and Protection of Animals. She raised three million French francs to fund the foundation by auctioning off jewelry and many personal belongings. Today, she is one of the world's most influential animal rights activists and a major opponent of the consumption of horse meat.

Considered a militant for animal protection, she condemned seal hunting in Canada during a visit to that country. She sought to discuss the issue with Stephen Harper, though her request for a meeting was denied.