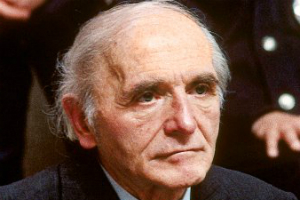 German Nazi war criminal, known as the Butcher of Lyon. Head of the Gestapo from 1942 to 1944, he went on trial in France on 05/11/1987, unrepentant and proud of his service with the Nazis during World War II. Convicted of "crimes against humanity," and sentenced to life imprisonment, the notorious Barbie died of cancer on 9/25/1991, Lyon, France.

The son of a school teacher, Barbie was born in the village of Bad Godesberg, near Bonn, Germany. While completing his studies at the Friedrich-Wilhelm Institute, he became a member of Hitler’s youth brigades. The year after receiving his degree in 1934, he joined the Security Service, a special branch of the SS under Himmler, the head of the Gestapo. In 1937 Barbie became a member of the Nazi party.

After noteworthy service in Amsterdam, Netherlands, Barbie was made chief of the Gestapo, Department Four, in Lyon, France in 1942, which became the scene of his most horrible crimes. A dedicated sadist who personally tortured those prisoners who came under his interrogation, Barbie was charged with ordering the arrest and torture of the French Resistance leader, Jean Moulin, which resulted in Moulin’s death. Barbie was also responsible for arranging the capture of 44 Jewish children and their five teachers, which ultimately resulted in their deportation to the Auschwitz extermination camp. Hitler himself awarded Barbie the "First Class Iron Cross with Swords," in recognition of his cruel, merciless treatment of the French partisans and the Jewish people.

When the war ended, Barbie escaped capture and went underground. Although wanted by the authorities in France, he was quickly recruited by the American Intelligence Service, which wanted to make use of his special "police skills" and his extreme zeal against anti-Communists. Arranging for him to move to South America and set up residence with his wife and children in La Paz, Bolivia, Barbie was protected and employed by American intelligence agents during the post-war period from about 1947 to the mid-1950s, during which time he carried out counterintelligence work. Living in Bolivia under the alias, Klaus Altmann, he obtained his citizenship there in the 1950s. While outwardly appearing to be a successful businessman, he worked primarily as an interrogator and torturer for the dictatorships of both Bolivia and Peru, and provided his services for the Luis Garcia Meza narco-coup in Bolivia during 1980.

Still a wanted man in France, Barbie’s past finally caught up with him in the early 1970s when the Klarsfelds, noted Nazi hunters, located him in Bolivia. It wasn’t until 1983, however, that his protection by the Bolivian government lapsed, and he was expelled from the country. Flown to French Guiana, he was arrested and returned to France. Although he had already been twice sentenced to death in absentia by the Military Tribunal of Lyon, in 1952 and 1954 respectively, Barbie was put on trial and held responsible for the deaths of over 4,000 persons and the forced deportation of some 7,500 others.

The life of this infamous Nazi war criminal was the inspiration for the Oscar award-winning documentary, "Hôtel Terminus," in 1988. A sobering drama, the film included incisive interviews with key individuals from Barbie’s life.