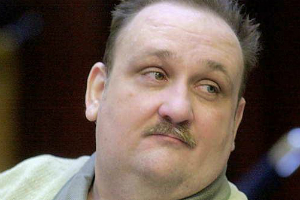 Nathaniel Benjamin Levi Bar-Jonah (February 15, 1957 – April 13, 2008), born David Paul Brown, was a convicted felon and alleged cannibal who was serving a 130-year prison sentence without the possibility of parole in Montana after being convicted of kidnapping, aggravated assault, and sexual assault of various children. He was born in Worcester, Massachusetts.

In 1974 he pleaded guilty to impersonating a policeman and assaulting an eight-year-old boy, for which he received one year of probation. In 1977, Brown was convicted of the kidnapping and attempted murder of two boys and was sentenced to 18 to 20 years in prison. He was strangling the two boys while one managed to escape and find help.

While in prison he was transferred to the Bridgewater State Hospital. In 1991, he changed his name to Nathaniel Benjamin Levi Bar-Jonah. He gave several reasons for changing his name. One reason he gave, during an interview with Dr. Michael Stone for the television show, "Most Evil", was that he was Jewish and wanted his name to reflect that. Another reason Bar-Jonah gave was that he changed his name because he wanted to know what it was like to be discriminated against and persecuted as a Jew. Later in the same year, Superior Court Judge Walter E. Steele ruled that Massachusetts had failed to prove that Bar-Jonah was dangerous and he was released before moving to Great Falls, Montana.

Bar-Jonah was arrested in 1999, again and initially for impersonating a police officer. After searching his home and finding, among other things, many pictures of young children cut out of magazines and a bone that was identified as belonging to an unknown young male, Montana police charged Bar-Jonah with kidnapping and sexual assault, as well as the kidnapping and sexual assault of three other boys.

Jonah had evidence against him and was going to be tried for the murder and cannibalism of young Zachary Ramsay. There was also evidence that Bar-Jonah cooked the child up and served him to unsuspecting guests and neighbors. However, the mother of this child refused to cooperate with the police authorities on the belief that it was not her son and he was still alive.

The charges involving the other three boys, on the other hand, were carried out and Bar-Jonah was convicted of kidnapping, aggravated assault, and sexual assault, including charges that he had tortured one of the boys and hung him from the ceiling. Bar-Jonah was convicted of kidnapping, aggravated assault, and sexual assault. He was given a 130-year prison sentence. He maintained his innocence up until his death. Montana authorities were unaware of Bar-Jonah's past trouble in Massachusetts, a fact that was cited by activists campaigning to force former sex offenders to register. In December, 2004, the Montana Supreme Court turned down Bar-Jonah’s appeals and upheld the conviction and 130-year prison sentence. Nathaniel Bar-Jonah was found unresponsive early Sunday April 13, 2008. He had been in poor health. His post mortem found significant levels of LDL in his arteries and myocardial infarction was the determined cause of death.