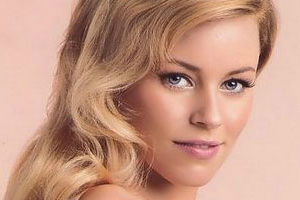 Banks was born in Pittsfield, Massachusetts and grew up on Brown Street, the eldest of four children of Ann (née Wallace) and Mark P. Mitchell. Her father was a factory worker for General Electric and her mother worked in a bank.

Banks changed her name to avoid confusion with actress Elizabeth Mitchell. She debuted in the 1998 independent film Surrender Dorothy, as Elizabeth Casey, appeared in various films over the next seven years before gaining more prominent widespread exposure through the 2005 comedy film The 40-Year-Old Virgin.

In August 2005, at the Williamstown Theatre Festival, Banks starred in William Inge's Bus Stop as Cherie, the sexy, blonde, aspiring nightclub singer. Jeffrey Borak wrote that Banks' portrayal was acted "with poise, clarity and a shrewd feel for Cherie's complexities. Her performance is all of a piece and in harmony, stylistically, with the performances around her...." In 2005, she appeared on the series Stella, and in May 2006, she had a role in the season five finale of the NBC sitcom Scrubs as Dr. Kim Briggs, the love interest of J.D. (Zach Braff). The character appeared throughout seasons six, seven and eight as a recurring guest star.

In 2006, Banks appeared in the American football drama film Invincible, in which she played Mark Wahlberg's love interest. Later, she and co-star Wahlberg were nominated for the "Best Kiss" award at the MTV Movie Award. Also that year, she landed the starring role in the comedy-horror film Slither.

In 2009, Banks appeared in the thriller The Uninvited, a remake of the Korean horror film A Tale of Two Sisters. The film was about an intrusive stepmother who makes life miserable for the teen daughters of her new husband. Banks based her character, Rachel, on Rebecca De Mornay's character in The Hand That Rocks the Cradle". "It was very important to me that every line reading I gave could be interpreted two ways," says Banks of her role, "So that when you go back through the movie you can see that".

Banks is a frequent co-star of actor Paul Rudd, the two having appeared in five films together to date (Wet Hot American Summer, The Baxter, The 40-Year-Old Virgin, Role Models and Our Idiot Brother).

Banks was cast as a love interest for Jack Donaghy (Alec Baldwin) in the fourth season of the Emmy Award-winning sitcom 30 Rock. Intended to appear in four episodes in 2010, Banks went on to become a recurring character with thirteen appearances by the end of the fifth season, including her marriage in the episode Mrs. Donaghy. Her performance in season five earned her a nomination for Primetime Emmy Award for Outstanding Guest Actress in a Comedy Series for the 63rd Primetime Emmy Awards.

Banks appeared in the movie The Hunger Games, playing Effie Trinket, a woman from "The Capitol" who escorts the District 12 tributes to the Hunger Games. In a February 2013 episode, Banks reprised her role as Sal on Modern Family.

Banks will portray Melinda Ledbetter Wilson, current wife of Brian Wilson in the upcoming biopic, Love and Mercy which is based on the legendary musician and founding member of the Beach Boys.

Banks met her husband, sportswriter and producer Max Handelman, on her first day at college on September 6, 1992. They were married in 2003. She and her husband had their first child, Felix, who was born via a surrogate in March 2011. In November 2012, Banks announced that her family had welcomed another son, Magnus Mitchell, also born via a surrogate.

Banks was raised in a family of both Irish Catholic and Anglo-Saxon Protestant background. She went through parts of the process of conversion to Judaism, her husband's faith, and studied with rabbis. In 2013, speaking of her religion, she stated that she practices Judaism, though "I did not have my mikveh, so technically I'm not converted", and added, "Frankly, because I'm already doing everything , I feel like I'm as Jewish as I'm ever going to be".