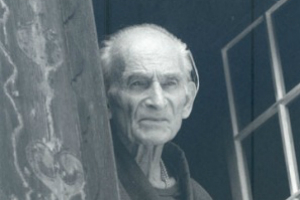 Polish-French artist, the son of Polish painter and art historian Erick Klossowski and painter Elisabeth Dorothee Spiro, encouraged with his art when young. In 1914, the family moved to Berlin; three years later his mom left her husband and moved to Geneva, Switzerland with her two sons. Balthus attended the Lycee Calvin for two years, his only period of formal education. Soon after, his mom, Baladine, became the lover of Rilke, and the poet became somewhat of a surrogate father to Balthus. Rilke arranged for the publication of a book of 40 ink drawings that Balthus had done between the ages of 9 and 11.

In 1924, at 16, he moved to Paris where he could study with Andre Gide along with his self-education as an artist, copying much of the local museum art. He took classes by Bonnard and Vlaminck as well. He traveled to Italy and toured Paris, painting street scenes and supporting himself by washing dishes and painting furniture, a period of extreme poverty.

After 15 months of military service in Morocco, where he contracted malaria, he spend a summer in Bern. About this time he met Antoinette de Watteville, the daughter of one of the oldest and richest families in the Swiss capital, whom he married in 1937. He painted her in 1930 and in 1932, and she served as his model for a series of 14 pen-and-ink drawings based on Emily Bronte's "Wuthering Heights" in 1932.

He had his first show in 1934 in Paris, shocking the avant-garde for its form and the Establishment for its content. During the '30s, painters were either Surrealists or abstractionists, and Balthus painted figurative work with a kinky, pedophile edge. His work drew comparisons with Vladimir Nabokov because of his fascination with the sexuality of girl-children. For the next three years he did mostly commissioned portraits, at least three of which are considered timeless masterpieces. In 1938 he exhibited at the Pierre Matisse Gallery in New York. His best work was done in the '30s to '50s.

At the start of WW II, he was drafted into the French army but quickly discharged after seeing action in Alsace where he was wounded. He and Antoinette moved to a French farm, then to Switzerland where their sons were born, Stanislas in 1942 and Thadee in 1944.

His early streetscapes and interiors were realistic with a sense of anguish and menace. In the following six decades, he produced only 300 or so works, landscapes, portraits and nymphets executed in an impeccable Renaissance style. His work later became more bright, and included such works as "Nude In Profile," 1973, "The Cat in the Mirror," 1977 and "Reclining Nude," 1980. Considered by many to the world's greatest living painter, nonetheless his portraits and nudes of young girls have made him as controversial as he is acclaimed. For others, he is an irrelevant, reactionary snob, preoccupied with nostalgia and obsessed with royalty. Over the years, as his canvases grew larger and the time spent on a work longer, his prices have become astronomical, with one painting going for $6 million.

Balthus and Antoinette separated in 1947, he moving to Paris and she to Lausanne. He had a series of mistresses from among his models for some years.

In 1962, in a temple in Kyoto, he met Setsuko Ikeda, the second great love of his life; he was 54 and she, 19. She was a modern girl from an old family, a French student. She became his model within days and then his mistress, moving into his Villa Medici a few months later. They were married in a Shinto ceremony in Tokyo in 1967 after he had completed his divorce from Antoinette, with whom he maintained a deep friendship. He and Setsuko had one daughter, Harumi in 1973, now a jewelry designer. They had a son in 1969, Junio, who died of a rare genetic disease when he was two. Setsuko then had a miscarriage at five months pregnancy. The tenderness between them was notable as they spoke together, mostly in French, though he had taught himself Japanese to court her.

From 1961-1978, Balthus was the Director of the Academie de France and traveled widely. From the mid-'70s he held court in his 37-room chalet in Rossiniere, a small Swiss village just down the road from the super-rich ski resort of Gstaad.

Balthus died 2/18/2001 at his chalet in Switzerland, age 92. During his last years in a grand house outside Gstaad, he insisted on styling himself the Comte de Rola, a genealogical fiction.