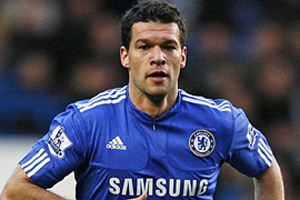 Michael Ballack (born September 26, 1976 in Görlitz, Saxony) is a German football player. He is the current captain of the German national team, and plays club football for Chelsea F.C. in the English FA Premier League.

He made his name as a classic box-to-box midfielder with Bayer Leverkusen, where he operated as the central midfielder, taking on both defensive and attacking responsibilities. Later in his career, at FC Bayern Munich, under the guidance of Ottmar Hitzfeld and Felix Magath, Ballack played in a deeper role, where he went forward less often and instead concentrated on protecting the back four and distributing the ball. However, he remained a box-to-box midfielder for the German national team.

He is capable with both his left and right foot, as well as in the air. These attributes earned him the German player of the year award on three occasions (2002, 2003, 2005). He is one of Germany's leading sports icons of recent times. Pelé named Ballack among the world's greatest 125 living footballers in FIFA's 2004 FIFA 100

Then, in 2004, the national team coach Jürgen Klinsmann elected Ballack as captain. Following Germany's third place finish in the World Cup in summer 2006, the new Germany head coach Joachim Löw chose to keep Ballack as his national team captain. Ballack has worn the number 13 shirt for every club that he has played for, as well as the German national team.

Chemnitzer FC
His parents sent him to train with the side when he was seven years old. He later moved on to FC Karl-Marx-Stadt (renamed Chemnitzer FC in 1990). His father had played second-division football himself in Germany. Unusual for his early age was Ballack's ability to use both feet with equal authority.

In 1995, Ballack earned his first professional contract, thanks to his impressive performances in the role of central midfielder. He was dubbed the "Little Kaiser", in reference to Franz Beckenbauer, who was nicknamed "The Kaiser". His professional debut came on 4 August 1995, on the first day of the new Second Bundesliga season. Chemnitz lost the game 2-1, against VfB Leipzig.

At the end of the season, during which Ballack made fifteen appearances, Chemnitz were relegated to the multi-tiered, regional third division. For Ballack himself, however, that season held one great success: on 26 March 1996, he made his debut for Germany's Under-21 side.

The following season, Ballack became a regular first-team player and almost helped Chemnitz to bounce straight back. He did not miss a game and scored ten goals for the "Sky Blues". It was not enough for Chemnitz to go up, but Ballack managed to win his own, personal promotion: in the summer of 1997, decorated German coach Otto Rehhagel of just-promoted 1. FC Kaiserslautern, signed Ballack at their return to top flight football.

FC Kaiserslautern
It was during the seventh game of the 1997-98 season, away to Karlsruher SC, that Rehhagel decided to throw young Ballack into the Bundesliga for the first time, if only for the final five minutes of the encounter. On 28 March 1998, Ballack found himself in the starting line-up for the first time - the opponents were Bayer Leverkusen, and the manager charged him with the crucial task of marking playmaker Emerson, his future team-mate, out of the game.

Ballack made sixteen appearances for his new team during the season and thus played a part in Kaiserslautern's success - the club became the first-ever newly promoted team to lift the league title. In the following season, Ballack became both a regular (he made 30 appearances, scoring four goals) and one of the side's leading players. Kaiserslautern reached the quarter finals of the Champions League, but were knocked out by Bayern Munich.

On 1 July 1999, some two months after his first full international, Ballack moved to Bayer Leverkusen at the age of 22, for a transfer fee of 8 m Deutsche Mark (€4.8 m).

Bayer Leverkusen
It was at Bayer Leverkusen that Ballack made his big breakthrough. Coaches Christoph Daum and Klaus Toppmöller granted him the whole of the pitch as his sovereign territory. With Bayer, Ballack was the man who pulled the strings in the centre of the pitch, making late runs into the opponents' penalty box, and also the reliable finisher upfront. Over his three seasons at the BayArena, he scored 27 goals in the league, and a further nine goals in Europe.

In 2000, Bayer needed only a draw against minnows SpVgg Unterhaching to lift the league title, but an unexpected own goal by Ballack sunk the club. Still, the disappointment of costing his team the title did not stymie his development into one of Europe's best midfielders.

He left Leverkusen after a memorable, if ultimately heartbreaking, 2001-02 season when they again came second in the Bundesliga to Borussia Dortmund and were beaten in both the UEFA Champions League final by Real Madrid and the German Cup final by Schalke 04. This became known as the "Treble Nightmare".

Ballack and Leverkusen teammates Bernd Schneider, Carsten Ramelow, and Oliver Neuville were even beaten finalists with Germany in the 2002 World Cup, although Ballack was suspended for the Final itself. Ballack finished with 17 league goals, and his remarkable season led to him being voted into the uefa.com users' Team of 2002 as well being named Germany's Footballer of the Year.

In spite of Spanish giants Real Madrid's interest, Ballack decided to sign with Bayern Munich in a €12.9 m deal in 2002. There, deployed in a more defensive role, Ballack still managed ten goals as Bayern stormed to the Bundesliga title. He also scored twice in the 3-1 German Cup final win against Kaiserslautern.

After a trying second season with the Bavarian giants, Ballack enjoyed more success in the 2004/05 season as Bayern Munich completed another double. New coach Felix Magath stated he was the only automatic starter in their midfield.] In four seasons at Bayern, Ballack won three Bundesliga and German Cup doubles and scored 47 goals in 135 matches. Between 1998 and 2005, Ballack notched up 61 goals in his domestic league.

However, Ballack's critics noted his frequent choking in important UEFA Champions League matches, as well as continually looking for a big international move. This resulted in open public criticism from club general manager Uli Hoeness, communications director Karl-Heinz Rummenigge and club president Franz Beckenbauer (all former Bayern players). Beckenbauer later went as far as to accuse Ballack of "saving his strength" for prospective employers Chelsea after Ballack turned in an average performance in the 2006 DFB-Pokal final against Eintracht Frankfurt.

During his few final games for Bayern, supporters at the stadium jeered at Ballack, angering him because he felt that he honoured his contract and conducted himself professionally on and off the pitch as a Bayern player. Shortly after his transfer to Chelsea, Ballack proclaimed sarcastically that the acrimony surrounding his departure made him glad as it proved how important he had been to Bayern. Ballack also rubbished accusations that money was his primary motivation in moving to Chelsea, stating that he earned well at Bayern. Ballack stated that he joined Chelsea to fulfill his dream of playing abroad. He also stated that Chelsea's fellow Premiership club Manchester United had made an approach, but he decided that Chelsea were a more attractive team to join. It could be said that United were in more need of such a player after the departure of Roy Keane, but the appeal of living in London probably made the decision for Ballack.

Chelsea F.C.
Ballack agreed to join Chelsea on a Bosman transfer on 15 May 2006. During his last season as a Bayern player there were rumours of interest from Manchester United, Real Madrid and A.C. Milan, but Ballack instead chose to go to Stamford Bridge . Shortly after arriving at Chelsea, Ballack stated that he hoped to end his career at Stamford Bridge.

Ballack's Chelsea debut came on Monday 31 July 2006, during a practice match at UCLA's intramural football pitch. Chelsea presented him to the media the following day where the club also gave him his favoured number 13 shirt, worn throughout his career. On 27 August 2006, Ballack earned his Premiership debut for Chelsea against Blackburn Rovers F.C., and his UEFA Champions League debut for Chelsea against Werder Bremen.

Ballack scored his first goal for Chelsea on 12 September 2006 in the Champions League group stage match against SV Werder Bremen. He received his first straight red card of his career in Chelsea's 1-0 win over Liverpool F.C. September 17 2006, after being judged to have stamped on Mohamed Sissoko's leg. Ballack scored his first Premiership goal on 21 October 2006 against Portsmouth F.C. in a home game at Stamford Bridge with a header. He and Andriy Shevchenko scored. His first FA Cup goal came in the 109th minute in a match against Blackburn Rovers on 15 April 2007. This goal resulted in Chelsea progressing into the FA Cup final. He scored 8 goals in all competitions for the club in the 2006-07 season.

On 28 April 2007, Chelsea released a statement on their official website, informing fans that Ballack had undergone ankle surgery in Munich. As a result of the surgery, Ballack did not play in the FA Cup Final against Manchester United, which Chelsea won 1-0 through Didier Drogba's extra time goal. This was Ballack's second trophy this season, his first being the Carling Cup.

In August 4, Spanish media reported that Real Madrid was close to signing Ballack and/or his Chelsea teammate Arjen Robben. Madrid coach Bernd Schuster told Spanish radio, "Hopefully, we'll be able to announce the signing of one or two big players soon." Schuster is said to have demanded Ballack, while Madrid's president Ramon Calderon, is known to favor Robben.

“I am totally committed to Chelsea. I came here to win trophies and be successful in English football, I want to assure the Chelsea fans of that. I am very happy in London professionally and for my family. The speculation about me leaving is not true. I have no interest in leaving Chelsea and I have had no contact with Real Madrid whatsoever. I am frustrated by my injury at the moment but I am working hard to be fit and hope to be back very soon to join my team-mates.”

International career
On March 26, 1996, Ballack debuted for the national U21 team's encounter with Denmark, shortly after signing for Chemnitz. In all, he played 19 matches for this side, scoring four goals. Then, following his move to Kaiserslautern, national coach Berti Vogts called him up to the senior team.

Ballack's first appearance, however, did not come until April 28, 1999, by which time the man in charge was Erich Ribbeck. Germany was playing Scotland on that day, and Ballack came on after sixty minutes to replace Dietmar Hamann.

Ballack only played 63 minutes at Euro 2000. In 2002 FIFA World Cup he scored in matches against USA and South Korea during the knock-out rounds as Germany reached the final, from which he was suspended.

Following Euro 2004, Jürgen Klinsmann replaced Rudi Völler at the helm of the national team and made Ballack the side's captain. Ballack is one of five national team captains in the current Chelsea team, along with Didier Drogba (Ivory Coast captain), Andriy Shevchenko (Ukraine captain), John Terry (England captain) and Claudio Pizarro (Peru captain). In the 2006 FIFA World Cup he was unable to start in Germany's first game against Costa Rica due to a calf strain, but appeared in the following five matches. Germany were eliminated in the semi-finals, but they managed to clinch 3rd place. He was named Man of the Match in the games against Ecuador and Argentina, and was included in FIFA's World Cup All Star Team.