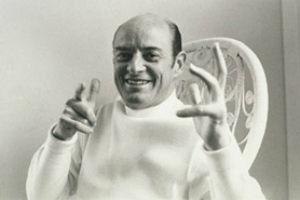 American stage actor, theater director and producer. The founder of the American Conservatory Theater, he made his directing debut with Chekhov on 10/07/1958. Restless and vital with an intense love of theater, he appeared with the San Diego Shakespeare Festival as Hamlet in 1955. The same year he began a one-year NBC/RCA Director’s Fellowship awarded to him by his alma mater, Carnegie Institute. In addition to being founder of the American Conservatory Theater, he served as its General Director in Pittsburgh in 1965, and helped shape the company’s performances in San Francisco and Chicago.

He graduated from the Iona Preparatory School, NY in 1948, and attended Fordham University in the Bronx, appearing in student productions. During summers, he toured with a Shakespearean company as assistant designer while acting in minor roles. In 1950, he transferred to the drama school at Carnegie Institute of Technology in Pittsburgh, appearing in various roles there and with surrounding companies. He received his degree there in acting and scenic design in 1953, then went to England to study repertory theater on a Fulbright scholarship. He obtained his M.A. degree in directing in 1955 from Carnegie Tech.

In mid-1955, Ball joined the San Diego Shakespeare Festival as Hamlet, then began a one-year NBC/RCA Directors fellowship awarded to him by the Carnegie Institute. He acted in various roles in off-Broadway and touring productions, followed by his New York debut as a director with his staging of Chekhov’s "Ivanov" which opened at the Renata Theatre on 10/07/1958. The production won him the Obie award from the Village Voice, and the Vernon Rice award as the best Off-Broadway director of 1958.

He won a special Lola D’Annunzio citation in 1961 for contribution to the Off-Broadway theater, based on his direction of a revival of Dylan Thomas’ verse narrative "Under Milk Wood." He was nominated for an Antoinette Perry award for his direction of "Tartuffe," Moliere’s satire, in 1965. Soon after this, he left for Pittsburgh, where he established a noncommercial repertory company called the American Conservatory Theater. He envisioned the theater as an experimental and educational resource for both actors and directors. Later, the group settled into an agreement where the cities of San Francisco and Chicago would house them at different intervals during the year.