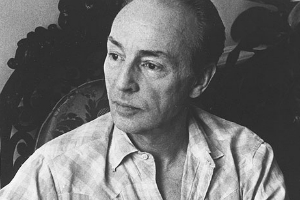 Russian-American dancer, known as one of the most famous choreographers in the field of ballet. Born to a Russian mother and a Georgian father, he embodied both Slavic extravagance of emotion and Georgian gallantry and love for women. Famous for his incredible "Balanchine ballerinas," he was recognized as the master at creating memorable roles for both female and male dancers. Credited with freeing ballet from the symmetrical form, which dominated during the 19th century, as well as with establishing the modern style of classical American ballet, his dance works number well over 200.

Born Georgi Melitonovich Balanchivadze in Saint Petersburg, Russia, he was exposed to music during his childhood by his father, a composer. As a result, he gained knowledge of music that was far superior to that of his fellow choreographers. At the age of five, he was already studying the piano, and by nine, he was studying dance at the St. Petersburg Academy. His debut came at the age of ten when he danced the role of a cupid in the Mariinsky Theatre Ballet Company’s production of "The Sleeping Beauty." In 1921, following his graduation from the Imperial Ballet School, he enrolled in the State Conservatory of Music where, for three years, he intensively studied musical theory, including composition, harmony and counterpoint, along with undertaking further piano instruction. By 17, he joined the Mariinsky Company as a member of the corps de ballet, and staged one work for them, called "Enigmas."

Most of his energy during the early 1920s was concentrated on choreographic experimentation. The vastness of his musical training made it possible for him to achieve phenomenal communication with the composers of the day, as well as endowing him with the ability to reduce orchestral scores on the piano; this skill proved an invaluable aid when he translated music into dance.

Critics were quick to mark Balanchine’s early efforts as too avant-garde, as in the 1922 series "Evenings of Young Ballet," and in the summer of 1924, he was one of four dancers who left the Soviet Union on a tour of Western Europe. Invited to audition for Serge Diaghilev’s "Ballets Russes" in Paris, all four of the dancers were accepted into the company in 1925. Diaghilev’s purpose in hiring Balanchine went further, because he wanted to make use of Balanchine’s choreographic abilities as well, and it wasn’t long until he replaced Bronislava Nijinsky as the ballet master of the company. A knee injury soon limited his dancing, and his commitment to full-time choreography increased correspondingly. He served in this position until 1929, when Diaghilev died and the company dissolved.

Balanchine spent the early 1930s involved with various projects throughout Europe, but eventually he returned to Paris and formed his own company, "Les Ballets," in 1933. During this period he met Lincoln Kirstein, an American ballet patron, and it was this meeting that led to his relocation to the United States. Arriving in late 1933, the partnership of Balanchine and Kirstein founded the School of American Ballet, which opened on 1/01/1934 with a class of 25. "Serenade," choreographed to music by Tchaikovsky for his students, was his first American ballet. Together Balanchine and Kirstein formed the American Ballet Company in 1935, but the company dissolved in 1938. During that same year, a proposed alliance with the Metropolitan Opera fell through, but Balanchine continued his work with the Original Ballet Russe until 1946. In 1946, he co-founded the Ballet Society with Kirstein, and in 1948, this company became the New York City Ballet. At last Balanchine’s talents had found a permanent home, and he served as Artistic Director of the company. His direction made it one of the world’s greatest performing groups, with a repertory consisting primarily of his own ballets. The company moved to Lincoln Center in 1964, when Balanchine’s reputation was at its peak.

Throughout the 1930s and early 1940s, he choreographed a number of musical comedies, and was considered a valuable asset on Broadway due to his imperturbable nature and ability to work quickly. He is credited with revolutionizing musical-comedy dance, by making the dance itself advance the plot.

Deemed a genius by many, his plotless ballets such as "The Four Temperaments," 1946, and "Jewels," 1967, are known for their explorations of pattern and movement of the human body to music. Drawing on serious music, like Stravinsky’s, his ballets emphasized "pure" dance and ensemble work. Balanchine’s style, sometimes described as neoclassic, ranged from classical dance works to choreography for more contemporary composers, including George Gershwin and Richard Rodgers. His later years were devoted to choreographing elaborate "story" ballets such as "Don Quixote" and "The Nutcracker."

Balanchine’s stated preference was to let the "dance be the star of the show," and for this reason he generally de-emphasized plot. He was widely admired for his ability to work with dancers in a calm and collected way, and preferred to call himself a craftsman, not a creator. One of his later works, "Violin Concerto," 1972, resulted from his nearly 40-year friendship with the Russian-born composer, Igor Stravinsky.

His wife, Tanaquil Le Clercq, 71, died in January 2001. She had contacted polio while on tour in Copenhagen with Balanchine in 1956 which left her paralyzed at 27 at the height of her career. In an eerie presentiment, Balanchine choreographed a ballet in 1944 in which he cast himself as a character named Polio and Le Clercq as his paralyzed victim.