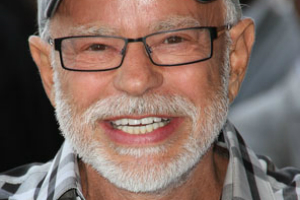 A sex scandal led to his resignation from the ministry. Subsequent revelations of accounting fraud brought about his imprisonment and divorce. He later remarried and returned to televangelism.

Bakker was born in Muskegon, Michigan, the son of Raleigh Bakker and Furnia Lynette "Furn" Irwin. Bakker attended North Central University, a Bible college affiliated with the Assemblies of God, in Minneapolis, Minnesota, where in 1960 he met fellow student Tammy Faye LaValley. He worked in a restaurant inside a department store in Minneapolis, and she had a job in a boutique for a time.

In 1966, the Bakkers began working at Pat Robertson's Christian Broadcasting Network, which at the time barely reached an audience of thousands. The Bakkers greatly contributed to the growth of the network, and their success with a variety show format (including interviews and puppets) helped make The 700 Club one of the longest-running and most successful televangelism programs.:6 The Jim and Tammy Show was broadcast for a few years from their Portsmouth, Virginia, studio and was aimed at young children. The Bakkers then left for California in the early 1970s.

Teaming with their former youth pastors Paul and Jan Crouch, the Bakkers created the "Praise the Lord" show for the Crouches' and Bakker's new Trinity Broadcasting Network in California. While that relationship lasted only about a year, this time the Bakkers retained the rights to use the initials PTL and traveled east to Charlotte, North Carolina, to begin their own show, The PTL Club. Their show grew quickly until it was carried by close to a hundred stations, with average viewers numbering over twelve million, and the Bakkers had established their own network, The PTL Television Network (also known as PTL-The Inspirational Network). They attributed much of their success to decisions early on to accept all denominations and to refuse no one regardless of race, creed, sexual orientation, or criminal record.

By the early 1980s, the Bakkers had built Heritage USA in Fort Mill, South Carolina (south of Charlotte), then the third most successful theme park in the US, and a satellite system to distribute their network 24 hours a day across the country. Contributions requested from viewers were estimated to exceed $1 million a week, with proceeds to go to expanding the theme park and mission of PTL. In justifying his use of the mass media, Bakker responded to inquiries by likening his use of television to Jesus's use of the amphitheater of the time. "I believe that if Jesus were alive today, he would be on TV," Bakker said.

In their success, the Bakkers took conspicuous consumption to an unusual level for a non-profit organization. According to Frances FitzGerald in an April 1987 New Yorker article, "They epitomized the excesses of the 1980s; the greed, the love of glitz, and the shamelessness; which in their case was so pure as to almost amount to a kind of innocence." Detractors often said that PTL stood for Pass The Loot.

PTL's fund raising activities between 1984–1987 underwent scrutiny by The Charlotte Observer newspaper, eventually leading to criminal charges against Jim Bakker. From 1984 to 1987, Bakker and his PTL associates sold $1,000 "lifetime memberships," which entitled buyers to a three-night stay annually at a luxury hotel at Heritage USA. According to the prosecution at Bakker's later fraud trial, tens of thousands of memberships had been sold, but only one 500-room hotel was ever completed. Bakker "sold" more "exclusive partnerships" than could be accommodated, while raising more than twice the money needed to build the actual hotel. A good deal of the money went into Heritage USA's operating expenses, and Bakker kept $3.4 million in bonuses for himself. A $279,000 payoff for the silence of Jessica Hahn, a staff secretary at the church, was paid with PTL's funds to Hahn through Bakker associate Roe Messner, who later married Tammy Fay Bakker. Bakker, who apparently made all of the financial decisions for the PTL organization, allegedly kept two sets of books to conceal the accounting irregularities. Reporters from The Charlotte Observer, led by Charles Shepard, investigated and published a series of articles regarding the PTL organization's finances.

On March 19, 1987, following the revelation of a payoff to Hahn to keep secret her allegation that Bakker and another minister had raped her, Bakker resigned from PTL. Bakker acknowledges he met Hahn at a hotel room in Clearwater, Florida, but denies raping her. Following Bakker's resignation as PTL head, he was succeeded in late March, 1987, by Jerry Falwell. Later that summer, as donations sharply declined in the wake of Bakker's resignation and the end of the Bakkers' popular PTL Club TV show, Falwell raised $20 million to help keep the Heritage USA Theme Park solvent, including a well-publicized waterslide plunge there. Falwell called Bakker a liar, an embezzler, a sexual deviant, and "the greatest scab and cancer on the face of Christianity in 2,000 years of church history". In 1988, Falwell said that the Bakker scandal had "strengthened broadcast evangelism and made Christianity stronger, more mature and more committed." Bakker's son, Jay, wrote in 2001 that the Bakkers felt betrayed by Falwell, whom they thought, at the time of Bakker's resignation, intended to help in Bakker's eventual restoration as head of the PTL ministry organization.:33–37

Following a 16-month Federal grand jury probe, Bakker was indicted in 1988 on eight counts of mail fraud, 15 counts of wire fraud and one count of conspiracy. In 1989, after a five-week trial which began on August 28 in Charlotte, the jury found him guilty on all 24 counts, and Judge Robert Potter sentenced him to 45 years in federal prison and a $500,000 fine.:52

He served time in the Federal Medical Center, Rochester, in Rochester, Minnesota, sharing a cell with activist Lyndon LaRouche and skydiver Roger Nelson.

In February 1991, the United States Court of Appeals for the Fourth Circuit upheld Bakker's conviction on the fraud and conspiracy charges, but voided Bakker's 45-year sentence, as well as the $500,000 fine, and ordered that a new sentencing hearing be held.

Jim and Tammy Bakker were divorced on March 13, 1992. On November 16, 1992, a sentence reduction hearing was held and Bakker's sentence was reduced to eight years.:104

In August 1993, Bakker was transferred to a minimum security federal prison in Jesup, Georgia, and was subsequently granted parole in July 1994, after serving almost five years of his sentence.:116, 130 Bakker's son, Jay, spearheaded a letter-writing campaign to the parole board on his father's behalf, urging leniency.:106–115

The Charlotte Observer reported that the Internal Revenue Service (IRS) still holds Bakker and Roe Messner, Tammy Faye's husband from 1993 until her death in 2007, liable for personal income taxes owed from the 1980s when they were building the PTL empire, taxes assessed after the IRS revoked the PTL ministry's nonprofit status. Tammy Faye Messner's new husband said that the original tax amount was about $500,000, with penalties and interest accounting for the rest. Notices stating the IRS liens list still identify "James O. and Tamara F. Bakker" as owing $6,000,000, liens on which Jim Bakker still pays.

Bakker has renounced his past teachings on prosperity theology, saying they were wrong. In his 1996 book, I Was Wrong, he admitted that the first time he actually read the Bible all the way through was while he was in prison, and that it made him realize he had taken certain passages out of context — passages which he had used as "proof texts" to back up his prosperity teachings. He wrote:

The more I studied the Bible, however, I had to admit that the prosperity message did not line up with the tenor of Scripture. My heart was crushed to think that I led so many people astray. I was appalled that I could have been so wrong, and I was deeply grateful that God had not struck me dead as a false prophet!

His son, Jay, who is now a minister at Revolution Church in New York City, wrote of the PTL years in his book, Son of a Preacher Man: "The world at large has focused on my parents' preaching of prosperity, but ... I heard a different message — one of forgiveness and the abundance of God's love. I remember my dad always seating a mentally handicapped man in the front row and hugging him. And when vandals burned an African American church down, Dad made sure its parishioners got the funds to rebuild. His goal was to make PTL a place where anyone with a need could walk in off the streets and have that need met.":8–9

In January 2003, Bakker began broadcasting the daily Jim Bakker Show at Studio City Cafe in Branson, Missouri, with his second wife, Lori. It is carried on the DISH and DirecTV satellite networks and the CTN cable network; the show currently has a millenial/survivalist focus. He and wife Lori have since adopted and/or taken in five children from the Phoenix inner-city neighborhoods Lori once frequented as a part of the Master's Commission, a worldwide discipleship program now based out of Relevant Church in the Dallas Metro area. In January 2008, Bakker's ministry moved into a new television studio near Branson, in Blue Eye, Missouri The studio is housed in a 600-acre (2.4 km2) development that resembles Bakker's former location, Heritage USA. Most or all of the property in the new development (named Morningside) is owned by associates of Bakker rather than by Bakker himself. The St. Louis Post-Dispatch reported that Bakker still owes the IRS about $6 million.