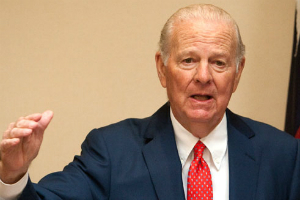 American moderate Republican politician, jurist and financier. Washington prognosticators were astonished when President Ronald Reagan named him Chief of Staff in November 1980. The appointment was surprising in the light that Baker, a corporate lawyer by profession, had managed the primary election campaigns of two of Reagan's most determined political opponents: President Gerald Ford in 1978 and George Bush, in 1980.

One of the Republican Party's best election strategists, Baker, who joined the Reagan campaign staff in mid-1980, quickly impressed the candidate with his know-how and organizational skill. As Chief of Staff, his main function was to supervise the activities of nearly 1,300 White House employees but he was also a trusted advisor to the President, particularly in the area of legislative affairs.

The son of a well-to-do attorney, Baker was raised with the social conscience of his heritage from youth. Not only his father but his grandfather had been civic leaders in Houston's finest law offices. He attended Princeton University, majoring in classics and receiving his B.A. in 1952. He then spent two years in the U.S. Marine Corps, where he was an expert marksman and a member of the pistol and rifle team at Camp Lejeune, NC. When he left the Corps, he joined the University of Texas to study law.

When he passed the bar in 1957, he was not able to join the family business by a company rule against nepotism, so he joined another high-powered corporate law firm in Houston. Within a decade, he was made a partner.

During those years, Baker was totally apolitical. It was not until 1970, following the death of his wife Mary that he became actively interested in politics. That year, Texas Congressman George Bush, a longtime friend who had recently announced his candidacy for the U.S. Senate, asked Baker to run his campaign. Largely due to Baker's skills, Bush easily won election and Baker switched parties to become, in his words, "absolutely, totally, pure Republican."

In 1972 Baker ran the campaign for President Richard Nixon. A few months later, he was named state Republican finance chairman. In 1976 he was chief delegate hunter for the Ford campaign. Personable and energetic, Baker rounded up the delegate votes that pushed Ford over the top. On 8/15/1976, Baker was named chairman of the Ford Committee, a move seen by political observers as an attempt by Ford to attract moderate and progressive voters to his cause. Despite his candidate's loss to Jimmy Carter, Baker earned a reputation as a campaign tactician of uncommon ability.

Baker returned to his law practice, but had been infected with political fever. In 1978 he announced his candidacy for the office of state attorney general.. He was beaten in the contest. A long-time friend of George Bush's, having met at the Houston Country Club in 1957, he agreed to manage Bush's campaign for the Presidential nomination in 1979. With his able assistance, Bush made a stunning victory as a candidate, but did not win the Presidency.

At Bush's suggestion, Baker joined the Reagan campaign team as a senior advisor. He was one of several aides who coached Reagan for the final TV confrontation with Carter, a debate that many felt was the clincher for the election to swing toward Reagan.

Ten days after Ronald Reagan's election to the Presidency, on 11/14/1980, Jim Baker was named White House Chief of Staff.

With his excellent track record for getting the job done, he entered the cabinet of the Bush administration in September 1989.

A slim, athletic six-footer, Baker appears to be a decade younger than his years. His gaze is direct, his soft twang is distinctly Texan, and wearing tailored suits and cowboy boots, he is able to mix with hard-hats or high hats. He does not like to lose and whatever he does, he does well. He is a fan of pro football and enjoys country-western music. He is an excellent tennis player and likes fishing.

In his personal life, family traumas have made severe inroads. His younger sister has required treatment for schizophrenia. He married Mary McHenry in 1953 and they had four sons, James IV, Mike, John and Doug. Mary had breast cancer in 1968 and died in February 1970 when the boys were aged 8 to 15. Her parents were killed in a car accident in 1977. He spent less time than needed with his sons and John was busted for dealing marijuana and Mike got heavily into alcohol; when the boys were in trouble, Baker was there for them.

On 8/06/1973, he married Susan Winston who had three kids; they had a daughter together in 1978. Drawing on their Christian faith, they attend a prayer group in Washington.