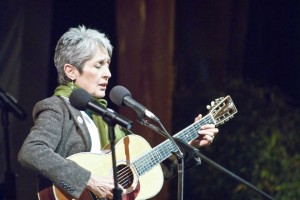 Joan Chandos Baez (born January 9, 1941) is an American folk singer and songwriter known for her highly individual vocal style. She is a soprano with a three-octave vocal range and a distinctively rapid vibrato. Many of her songs are topical and deal with social issues.

She is best known for her 1970s hits "Diamonds & Rust" and "The Night They Drove Old Dixie Down" -- and to a lesser extent,"We Shall Overcome" "Sweet Sir Galahad" and "Joe Hill" (songs she performed at the 1969 Woodstock festival).

She is also well known due to her early and long-lasting relationship with Bob Dylan and her even longer-lasting passion for activism, notably in the areas of nonviolence, civil and human rights and, in more recent years, the environment. She has performed publicly for nearly 50 years, released over 30 albums and recorded songs in over eight languages.

She is considered a folksinger although her music has strayed from folk considerably after the 1960s, encompassing everything from rock and pop to country and gospel.

Although a songwriter herself, especially in the mid-1970s, Baez is most often regarded as an interpreter of other people's work, covering songs by Bob Dylan, The Beatles, Jackson Browne, Paul Simon, The Rolling Stones, Stevie Wonder and myriad others. In more recent years, she has found success interpreting songs of diverse songwriters such as Steve Earle, Natalie Merchant and Ryan Adams.