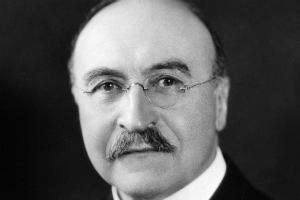 Belgian born chemist who invented Velox photographic paper (1893) and Bakelite (1907), an inexpensive, nonflammable, versatile, and popular plastic, which marks the beginning of the modern plastics industry.

Baekelandt became a naturalized American in 1897, and a professor by special appointment at Columbia University in 1917. He patented more than 55 inventions, including processes for the separation of copper and cadmium, for the impregnation of wood, etc.

Bakelite was the first plastic invented that held its shape after being heated. Radios, telephones and electrical insulators were made of Bakelite because of its properties of insulation and heat-resistance. Soon it penetrated nearly all branches of industry.

Baekeland was awarded the Franklin Medal in 1940.

As Baekeland got older he became more eccentric, getting into fierce battles with his son and presumptive heir over salary and other issues. He sold the General Bakelite Company to Union Carbide in 1939 and, at his son's prompting, he retired. He became a recluse, eating all of his meals from cans and becoming obsessed with drugs, and developing an immense tropical garden on his winter estate in Coconut Grove, Florida. He died of a cerebral hemorrhage in a sanatorium in Beacon, New York. Baekeland is buried in Sleepy Hollow Cemetery in Sleepy Hollow, New York